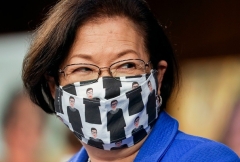 Democratic presidential nominee Joe Biden has used the same term on the campaign trail this year, more than once.

The issue arose after Barrett replied to questions from Senate Judiciary Committee ranking member Dianne Feinstein (D-Calif.), who raised concerns that Barrett would “roll back hard-fought freedoms and protections for the LGBTQ community.”

“Like racism I think discrimination is abhorrent. On the question of law, however, because I am a sitting judge and because you cannot answer questions without going through the judicial process, I cannot give answers to those very specific questions.”

Feinstein did not challenge her terminology but, later on, Sens. Mazie Hirono (D-Hawaii) and Cory Booker (D-N.J.) did.

“If it is your view that sexual orientation is merely a preference, as you noted,” Hirono said, “then the LGBTQ community should be rightly concerned whether you would uphold their constitutional right to marry.”

Hinoro also opined that she did not “think it was an accident” that Barrett used the term.

She went on to say that 11 million American adults “identify as LGBTQ,” and that 293,000 same-sex couples have married since the court’s 2015 Obergefell v. Hodges ruling legalizing same-sex marriage.

“Many of these people are rightly afraid that if you’re confirmed you will join with other conservative members of the court to roll back everything the LGBTQ community has gained over the past two decades and push them back into the closet,” Hirono said.

When eventually given the opportunity ro respond, Barrett said, “I certainly didn’t mean and, you know, would never mean to use a term that would cause any offense in the LGBTQ community. So if I did, I greatly apologize for that. I simply meant to be referring to Obergefell’s holding with respect to same-sex marriage.”

Questioned subsequently by Booker on her use of the term “sexual preference,” Barrett said again she rejects “any kind of discrimination on any sort of basis.”

Lambda Legal, an advocacy group that opposes Barrett’s nomination, took her to task on Twitter. “This is a dogwhistle. The term ‘sexual preference’ is used by opponents of equality to suggest that being LGBTQ is a choice.”

“The correct term is sexual orientation,” tweeted the Gay & Lesbian Alliance Against Defamation (GLAAD), while MSNBC producer Kyle Griffin also weighed in: “‘Sexual preference,’ a term used by Justice Barrett, is offensive and outdated. The term implies sexuality is a choice. It is not. News organizations should not repeat Justice Barrett’s words without providing that important context.”

Biden used the term “sexual preference” on at least two occasions while campaigning this year.

In May, he said during a virtual round table with African Americans, “I’m going to need you to help this time rebuild the backbone of this country, the middle class, but this time bring everybody along regardless of color, sexual preference, their backgrounds.”

The following month, speaking to African American community leaders at a church in Wilmington, Delaware following the death of George Floyd, Biden used the wording again: “It is a little bit like when I came out and said I did not think we should discriminate against people based on their sexual preference.”