Vatican Intervenes, Urges U.S. Bishops to Slow Down on Policy of No Communion for Pro-Abortion Catholic Politicians 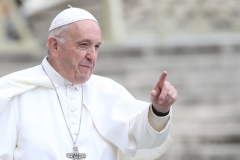 (CNS News) -- As U.S. Catholic bishops prepare for a June meeting on how to address the scandal of pro-abortion Catholic politicians receiving Holy Communion, the Vatican's doctrinal office has sent a letter to the bishops essentially urging them to slow down, delay, take more time to debate and communicate before formulating a policy on the issue.

Cardinal Luis Ladaria, prefect of the Congregation for the Doctrine of the Faith, the office that defends official Catholic teaching, said in a May 7 letter to the bishops that when this topic was discussed in 2019-2020, "the formulation of a national policy was suggested ... only if this would help the bishops to maintain unity."

Cardinal Luis Ladaria, head of the Congregation for the Doctrine of the Faith. (Getty Images)

"This Congregation notes that such a policy" today, "given its possibly contentious nature, could have the opposite effect and become a source of discord rather than unity within the episcopate and the larger Church in the United States."

The Congregation wants the U.S. bishops to "dialogue" in "two stages: first among the bishops themselves, and then between bishops and Catholic pro-choice politicians within their jurisdictions," reads the letter.  (Apparently, this is the first time the Vatican has used the word "pro-choice" to describe that which is anti-life.)

"The bishops should affirm as a Conference that 'those who are directly involved in lawmaking bodies have a grave and clear obligation to oppose any law that attacks human life," states the letter.

"After this agreement is reached, they could then move to implement the second stage in which local Ordinaries [bishops] would reach out to and engage in dialogue with Catholic politicians within their jurisdictions who adopt a pro-choice position regarding abortion legislation, euthanasia, or other moral evils, as a means of understanding the nature of their positions and their comprehension of Catholic teaching," wrote the cardinal.

In the United States, some of the most prominent Catholic politicians who support abortion are well known and their anti-life position has been well-documented for decades. Some of these politicians include President Joe Biden, HHS Secretary Xavier Becerra, Sen. Dick Durbin (D-Ill.), John Kerry, Sen. Tim Kaine (D-Va.), and House Speaker Nancy Pelosi (D-Calif.).

In a recent pastoral letter, "Before I formed you in the womb I knew you," San Francisco Archbishop Salvatore Cordileone explained the genocidal nature of abortion and also discussed how bishops must privately speak with pro-abortion Catholic politicians to try to persuade them to follow Church teaching.

However, "the experience of some of us in Church leadership over many years demonstrates the sad truth that often such interventions can be fruitless," wrote Archbishop Cordileone. "It can happen that the conversations tend to go nowhere, thus leaving it easy for the individual to continue participating fully in the life of the Church. Such a situation is a cause of scandal to many of the faithful."

Nonetheless, Cardinal Ladaria tells the U.S. bishops that after pursuing these private conversations with pro-abortion Catholic politicians, the bishops could then discern "the best way forward for the Church in the United States to witness to the grave moral responsibility of Catholic public officials to protect human life at all stages."

"If it is then decided to formulate a national policy on worthiness for communion, such a statement would need to express a true consensus of the bishops on the matter," states Cardinal Ladaria, "while observing the prerequisite that any provisions of the Conference in this area would respect the rights of individual Ordinaries [bishops] in their dioceses and the prerogatives of the Holy See."

In other words, even if the U.S. bishops agree to a unified statement or national policy, individual Ordinaries, individual bishops, apparently would still be allowed to decide who may receive communion in their dioceses.

Further, Ladaria writes, "It would be misleading if such a statement were to give the impression that abortion and euthanasia alone constitute the only grave matters of Catholic moral and social teaching that demand the fullest level of accountability on the part of Catholics."

The U.S. bishops, most of them, have said that preserving the right to life, from the moment of conception until natural death, is the "pre-eminent priority" of the Catholic Church. It cannot be placed on the same moral level as immigration or poverty, which some liberal bishops do.

A baby killed by saline-injection abortion. (Priests for Life.)

As Archbishop Cordileone wrote in his recent pastoral letter, "It is for good reason, then, that the bishops of the United States speak of this [abortion] as the 'pre-eminent' political issue of our time and place 'because it directly attacks life itself, because it takes place within the sanctuary of the family, and because of the number of lives destroyed.'"

Since 1973, when Roe v. Wade made abortion legal nationwide, an estimated 63 million children have been killed by surgical abortion in the United States.