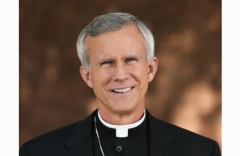 Bishop Joseph Strickland, head of the Diocese of Tyler, Texas.

(CNS News) -- In a re-tweet posted on Friday, Feb. 19, Bishop Joseph Strickland, head of the Diocese of Tyler, Texas, said President Joe Biden is "not a real Catholic."

Biden and his supporters in the left-wing media frequently refer to his "devout" Catholicism, but gloss over his support for abortion on demand, gay marriage, gay adoption, and other issues contrary to the moral teachings of the Catholic Church.

"Hate me if you want but Biden is not a real Catholic....just a fact," tweeted Bishop Strickland in response to comments that support for President Trump is an "abomination to the Lord."

Hate me if you want but Biden is not a real Catholic....just a fact

Back in September, Bishop Strickland had tweeted, "GET OVER IT....this election is about the Sanctity of Life, true marriage between a man & a woman, supporting the nuclear family and sexual morality based on biblical truth....all other issues depend on this moral foundation...choose the party that supports these MORAL TRUTHS."

In a Jan. 20 statement, the president of the U.S. Conference of Catholic Bishops, Archbishop Jose Gomez said, "I must point out that our new President has pledged to pursue certain policies that would advance moral evils and threaten human life and dignity, most seriously in the areas of abortion, contraception, marriage, and gender."

"Abortion is a direct attack on life that also wounds the woman and undermines the family," he wrote. "It is not only a private matter, it raises troubling and fundamental questions of fraternity, solidarity, and inclusion in the human community."

"It is also a matter of social justice," said Gomez. "We cannot ignore the reality that abortion rates are much higher among the poor and minorities, and that the procedure is regularly used to eliminate children who would be born with disabilities."

This week, the USCCB reaffirmed its opposition to the pro-LGBTQ "Equality Act" and urged Americans to contact their congressional representatives and tell them to vote no on the legislation, which is being promoted by President Joe Biden.

“The Equality Act discriminates against people of faith and threatens unborn life. Tell Congress to oppose it!” says a page on the USCCB website.

“The Equality Act would…force girls and women to compete against boys and men for limited opportunities in sports, and to share locker rooms and shower spaces with biological males who identify as women,” the USCCB explains on that page.