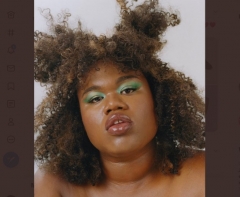 (CNS News) -- TeenVogue, an online magazine targeted to teenage girls, chose to put two transgender "women" -- i.e., biological males who "identify" as women -- on its September cover, with the headline "What is Fashion Now?"

The two "women" highlighted are Munroe Bergdorf, a model, and Jari Jones, also a model, actress, and writer.

During a year of rebellion + revolution, this September we wanted to center the women at the heart of fashion but often left out of the conversation: @munroebergdorf + @iamjarijones — two Black trans women who are trailblazers, redefining the industry 🚀✨ https://t.co/lqeT2Bwtg6 pic.twitter.com/aFh65n6o94

On his website, Bergdorf states, "I happen to be mixed-race and transgender. I was assigned male at birth, but never felt comfortable with that label. Adolescence was confusing for me and at 24, finally, I began identifying outwardly as female. This was an incredibly freeing time for me and the start of my transitional journey - one that I accept will never fully conclude itself."

To watch Bergdorf, 33,  explain why he is a "little bit of a witch," click here.

Jari Jones, 29, was the face of Calvin Klein for June Gay Pride month. Jones is in a relationship with Corey Kempster, another transgender "woman."

In announcing its September cover, TeenVogue posted on Twitter, "During a year of rebellion + revolution, this September we wanted to center the women at the heart of fashion but often left out of the conversation: @munroebergdorf + @iamjarijones — two Black trans women who are trailblazers, redefining the industry."

In an Instagram post about the cover, Bergdorf said, “I really don't have the words to describe how this feels. As a Black, queer, transgender woman, I never ever thought that I could be on the cover of Vogue. But here we are! Dreams do come true ... This is a moment I won't ever forget.”

Jari Jones said on Instagram, "If I could show you my whole heart personified, it would look like this cover. We have all had dreams about gracing a vogue cover but how often we had to skew our image to even imagine it. So to have this cover in my most authentic skin , a black , dark skin, fat , trans woman, I am over and beyond and so grateful to @lpeopleswagner and the @teenvogue fam for giving me the platform to exist in my real self , to give in my genuine skin , to inspire in my authentic body."

The way @TeenVogue demonstrates iconic behavior. Congrats to my sisters @IAmJariJones & @MunroeBergdorf for these powerful covers! Love to see it ❤ pic.twitter.com/lPWzpJ4OXW