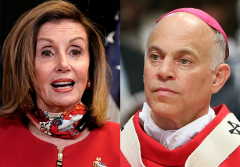 (CNS News) -- San Francisco Archbishop Salvatore Cordileone, who has repeatedly implored pro-abortion Catholic politicians, especially House Speaker Nancy Pelosi (D-Calif.), to accept the pro-life teaching of the Church, recently called on all Catholics to say some special prayers (and fast) every Friday for Pelosi to have a conversion of heart.

So far, some 12,987 people have responded to the archbishop's request.

"Witness the House of Representatives’ passage of HR 3755, which would impose abortion on demand nationwide at any stage of pregnancy," said the archbishop. "A conversion of heart of the majority of our congressional representatives is needed on this issue, beginning with the leader of the House, Speaker Nancy Pelosi."

“I am therefore inviting all Catholics to join in a massive and visible campaign of prayer and fasting for Speaker Pelosi: commit to praying one rosary a week and fasting on Fridays for her conversion of heart," said Cordileone.  "Please sign up for the ‘Rose and Rosary for Nancy’ campaign at BenedictInstitute.org, and a rose will be sent to her as a symbol of your prayer and fasting for her.”

“Speaker Pelosi speaks fondly of her children," he added. "She clearly has a maternal heart.  Pope Francis has called abortion murder, the equivalent of hiring a hitman to solve a problem.  The solution to a woman in a crisis pregnancy is not violence but love."

"Please join me in praying the rosary and fasting for a conversion of Speaker Pelosi’s maternal heart to embracing the goodness and dignity of human life not only after birth, but in the womb as well," said the archbishop.

HR 3755, called the "Women's Healh Protection Act of 2021," is co-sponsored by Pelosi, and it passed in the Democrat-controlled House of Representatives on Sept. 24, 2021.

As explained by Archbishop Joseph Naumann, chairman of the U.S. Conference of Catholic Bishops’ (USCCB) Committee on Pro-Life Activities, the legislation pushed by Pelosi is a "“deceptively-named, extreme bill [that] would impose abortion on demand nationwide at any stage of pregnancy [and] … eliminate modest and widely supported pro-life laws at every level of government."

Archbishop Cordileone said, "Any reasonable person with a basic sense of morality and inkling of decency cannot but shudder in horror at such a heinous evil being codified in law."

"It is especially shameful that any self-professed Catholic would be implicated in such an evil, let alone advocate for it.  To Catholic politicians in particular, I implore you to listen to the words of Pope Francis who just last weekend, during his flight back to Rome from Slovakia, said: 'Abortion is more than a problem.  Abortion is homicide….  It is a human life, period.  And this human life must be respected.  This principle is so clear, and to those who cannot understand, I would ask two questions: is it right to kill a human life to solve a problem?  Scientifically, it is a human life.  The second question: is it right to hire a hitman to solve a problem?'"

"This proposed legislation is nothing short of child sacrifice," said Cordileone.

To learn more about the prayer and fasting campaign for Speaker Pelosi's conversion, visit the Benedictinstitute.org.