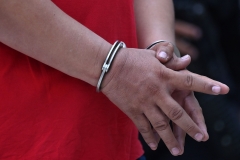 (CNS News) – In May, the 14-year-old daughter of plumber Scott Smith reportedly was raped in the girls’ bathroom at a Loudoun County, Va., public school by a boy wearing a skirt. The boy subsequently was transferred to another Virginia school where he reportedly attacked another female teen last week. All the while, the Loudoun County School Board was pushing a transgender bathroom policy, which it approved in August and has begun implementing.

Yet the major news outlets – ABC, CBS, NBC, CNN, MSNBC – aren’t covering the story, so far. The alleged rapist reportedly is a “gender-fluid individual,” according to Fox News.

Although the assault occurred on May 28, the first arrest on July 8, and the second assault and arrest on Oct. 6, the Loudoun County School Board did not inform parents about the crimes.

As all this was occurring, the school board was enthusiastically supporting making accommodations for transgender students. Finally, in August, despite numerous parents’ objections, the board approved (7-2) a transgender rights policy, which requires teachers to call students by their preferred pronouns. It also mandates renovating the bathrooms in Loudoun County public schools to allow for “gender-inclusive” and “single-user restrooms.”

At a June 22 school board meeting, Loudoun County Public Schools Superintendent Scott Ziegler had brushed-off parents’ concerns, claiming, “the predator transgender student or person simply does not exist,” and, to his knowledge, "we don’t have any record of assaults occurring in our restrooms.”

The story finally became major news in Virginia and on social media – but not by the major media -- after the first victim’s father, Scott Smith, spoke about the case to The Daily Wire, an online news outlet.

Because the victim of the May 28 assault is a minor and the alleged perpetrator a minor, very little information is available to the public.

“Due to exclusions under the Virginia Code regarding disclosure of juvenile reports and the fact the case is pending court proceedings, the Loudoun County Sheriff’s Office (LCSO) is limited as to what information can be released,” said the sheriff’s office in an Oct. 13 statement.

However, the statement confirms that a sexual assault occurred at the Stone Bridge High School in Ashburn, Va., on May 28, 2021. The sheriff’s office conducted an investigation for several weeks, and on July 8, “a 14-year-old male was arrested in the case with two counts of forcible sodomy.”

“Following the arrest on July 8, 2021, the judicial process was turned over to the Loudoun County Commonwealth’s Attorney’s Office to determine bail, or in the case of a juvenile, the continuance of detention or other legal restrictions set forth as part of court proceedings in the Loudoun County Juvenile and Domestic Relations District Court,” reads the statement.

The sheriff’s office further said, “The October 6, 2021 incident at Broad Run High School did not involve complex circumstances, the arrest was immediate, and the arrest was reported to the community as information released was unlikely to disclose the identity of the victim. However, the May 28, 2021 investigation was different in that the suspect and victim were familiar with each other, the investigation was complex, and a public announcement had the potential to identify a juvenile victim.”

“October 6, the boy is arrested for a second attack on another girl in another school, in a classroom,” he said. “No coverage whatsoever. On Tuesday, The Daily Wire comes out with the expose where they connect the dots. It’s a horrible study, it shows the consequence of what happens with a transgender bathroom in a school. No coverage whatsoever except for Fox and a handful of other sites.”

Bozell continued, “Yesterday, the school board came out with a statement, the most cowardly statement I have ever read, saying, ‘We didn’t know about it, nobody told us about it. Don’t look at us.’ The girl has been forcibly sodomized in their school and they still don’t care.”