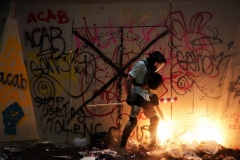 (CNS News) -- The U.S. Attorney's Office for the District of Oregon announced on Friday that 18 people were arrested in connection with the violent protests at the courthouse in Portland, Ore., and their alleged criminal conduct included such actions as assaulting federal officers, damaging government property, and arson.

"U.S. Attorney Billy J. Williams announced today that 18 people have been arrested and are facing federal charges this week for their roles in recent weeknight protests at the Mark O. Hatfield U.S. Courthouse in Portland," said the Department of Justice (DOJ) in a July 24 press release.

Since the protests started in late May, there has been "nightly criminal activity, including assaults on law enforcement officers, destruction of property, looting, arson, and vandalism," said the DOJ. "The Hatfield Federal Courthouse has been a nightly target of vandalism during evening protests and riots, sustaining extensive damage."

The 18 people arrested and charged for alleged criminal conduct are:

Caleb Ehlers, 23, and Paul Furst, 22, charged with failing to comply with a lawful order;

Marnie Sager, 27, and Ella Miller, 26, charged with failing to comply with a lawful order;

The DOJ stressed that the charges and criminal complaints are "accusations of a crime, and defendants are presumed innocent unless and until proven guilty."

All 18 defendants were released pending jury trials or other court proceedings, stated the DOJ press release.