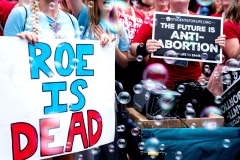 (CNS News) -- Conservatives across America cheered the Supreme Court's ruling (6-3) today to uphold a Mississippi abortion law and overturn the 1973 decision Roe v. Wade, which made abortion legal nationwide. Jeanne Mancini, president of the March for Life said, "Today, the Supreme Court handed down one of its most life-honoring decisions in decades, simultaneously correcting one of the darkest eras in our nation’s history."

An estimated 62 million babies have been killed by abortion in the U.S. since Roe v. Wade became law. With today's court ruling in Dobbs v. Jackson Women's Health Organization abortion law is returned to the states. Some blue states, such as New York and California, already have liberal abortion laws on the books while some red states, such as Missouri and Oklahoma, have essentially banned abortion.

Commenting on the ruling, Judicial Watch President Tom Fitton said in a statement, "This is a day to celebrate life! Five Supreme Court justices today stood strong in support of the Constitution by overturning Roe. Now states can again extend the protection of law to the precious lives of unborn human beings."

Lives are being saved as we speak!

"Americans will mourn the tens of millions human beings lost to abortion on demand under the Roe regime," said Fitton. "But Americans will soon rejoice for the millions who will live thanks to Roe being thrown into the dustbin of history."

Fitton also warned, "Americans can expect an escalation of the terror campaign by pro-abortionists against the Justices, pro-life centers that help pregnant mothers, and Catholic and other Christian churches that support the right to life."

Brian Burch, president of CatholicVote said in an email, "Immediately following today’s decision, the state of Missouri moved to activate their law outlawing abortion. We are seeing reports that abortions in Kentucky, Arkansas, Louisiana, and other states have been halted. The Attorney General of Texas declared abortion illegal and shut down his office announcing henceforth today would be a holiday in honor of the millions of children lost."

"More babies' hearts will beat across America because of this decision." - Brian Burch, CatholicVote President

"God wins again," said Burch. "Not only was Roe overturned on the day we celebrate the Sacred Heart, but every other year it will fall on the Nativity of John the Baptist -- who recognized the humanity of Christ in the womb."

Senator Ted Cruz (R-Texas) in a statement said, "The Supreme Court's decision in the Dobbs case, reversing Roe v. Wade, is nothing short of a massive victory for life, and it will save the lives of millions of innocent babies."

"The decision reverses one of the most egregious departures from the Constitution and legal precedent the United States has ever seen," said Cruz, "and one that has resulted in the deaths of 63 million American children."

Lila Rose, president of Live Action, tweeted, "Roe v. Wade is OVERRULED!!! Held: The Constitution does not confer a right to abortion; Roe and Casey are overruled; and the authority to regulate abortion is returned to the people and their elected representatives. ... There are children who were scheduled to die today that will live instead."

Held: The Constitution does not confer a right to abortion; Roe and Casey are overruled; and the authority to regulate abortion is returned to the people and their elected representatives.

Senator Rand Paul (R-Ky.) tweeted, "This Supreme Court decision is a monumental step to not only protect life but also for the court to finally correct the mistake it made and return governance back to the people and their elected representatives."

Author and columnist Ben Shapiro tweeted, "Joe Biden now making the single best case for Trump: it was justices he appointed who are responsible for overturning Roe." He also wrote, "Hundreds of thousands of children will now live who would otherwise have been killed in the womb. This is a victory for all human beings, who are created in the image of God."

Mollie Hemingway, editor-in-chief of The Federalist, tweeted, "America Has Donald Trump To Thank For Roe v. Wade Finally Being Overturned "Trump and his Republican backing fought to put solid picks on the court, justices who stood firm and gave their final word on Roe."

There is no issue on which corporate media are more out of line with public opinion, the Constitution, and human rights than abortion. They are bloodthirsty supporters of, and prioritize, the violence of abortion. Keep that in mind as you follow their propaganda outlets today.

Brent Bozell, president of the Media Research Center, tweeted, "Roe v Wade was the most horrific decision ever issued by the court. It is finally gone. Thank you, President Trump."

In a statement, the U.S. Conference of Catholic Bishops said, "This is a historic day in the life of our country, one that stirs our thoughts, emotions and prayers. ... Our first thoughts are with the little ones whose lives have been taken since 1973. We mourn their loss, and we entrust their souls to God, who loved them from before all ages and who will love them for all eternity."

"Our hearts are also with every woman and man who has suffered grievously from abortion; we pray for their healing, and we pledge our continued compassion and support," said the bishops.  "As a Church, we need to serve those who face difficult pregnancies and surround them with love. ... “Now is the time to begin the work of building a post-Roe America."

Today, Life Won. By overturning Roe v. Wade, the Supreme Court of the United States has given the American people a new beginning for life and I commend the Justices in the majority for having the courage of their convictions.

House Rep. Chris Smith (R-N.J.) in a statement said, "Today, at long last, Justice Alito writing for the majority of the U.S. Supreme Court has reversed Roe (and Casey) and has returned the power to lawmakers to significantly regulate or even prohibit abortion. ... The hope and moral imperative to protect innocent children's lives from extermination couldn't come a moment too soon."

Even a very liberal but pro-life organization, praised the court ruling. Terrisa Bukovinac, the founder and executive director of Progressive Anti-Abortion Uprising, said, "Today we dance on the grave of Roe vs. Wade. Humankind is now one step closer to justice for the 60 million unborn victims of systemic state-sanctioned, eugenic, and profit-driven murder."

"All people are guaranteed equal protection under the law as enshrined in the 14th amendment, including LGBTQ+ and BIPOC people, and those yet to be born," said Bukovinac. "We demand that this existing constitutional law is enforced across all 50 states, beginning now.”

(Disclosure: Brent Bozell is the president of the Media Research Center, the parent organization of CNS News.com)