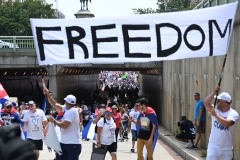 Protesters gather near the Cuban embassy during a protest in support of continued anti-government protests in Cuba in Washington DC, on July 26, 2021. (Getty Images)

(CNS News) -- A full-page ad placed in the New York Times on July 23 by the left-wing Code Pink organization, and signed by numerous left-wing luminaries, was denounced by the Center for a Free Cuba as "siding with the repressive dictatorship of Cuba’s abuses against the people of Cuba."

The ad, headlined "Let Cuba Live," is an open letter to Democratic President Joe Biden calling on him to rescind the "coercive measures" put on Communist Cuba by the Trump administration. It also calls for returning to the "opening" to Cuba started by President Barack Obama and perhaps ending the U.S. embargo against the island.

The Center for a Free Cuba (CFC), which supports the Cuban people and opposes the communist regime there, said, "Left out of the ad is the fact that Cuba has no free or independent trade unions, newspapers, radio or television stations, civic associations, nor does the population have any other avenue to express its disgust with its government than by protesting in the streets."

The protests in Cuba that started on July 11 were the "result of six decades of stifling oppression, human rights abuses, and failed communist central planning," said the CFC.  "It was spontaneous, and Cubans of all races participated. The cry of the tens of thousands across Cuba was for 'Libertad' - Liberty! Not 'Lift the Embargo.'"

In the wake of those spontaneous protests, the dictatorial regime unleashed "a brutal wave of beatings, disappearances of citizens, jailings, and extrajudicial executions that are akin to the worst ever carried out by other totalitarian regimes in the past," said the CFC.

"The Cuban people know that the scarcities that Codepink falsely attributes to the limited U.S. embargo are the result of 62 years of Marxist-Leninist rule," said the organization. "It is their own government that Cubans asked to be changed, not U.S. policy."

"Cuba trades with the rest of the world, and the U.S. is one of the largest providers of food to the island," the CFC added. "Havana cannot buy more from abroad because the ruling elites have stolen or wasted the money, and price gouge Cubans with the products imported."

According to Code Pink and LetCubaLive.com, "over 400 prominent activists, intellectuals, scientists and artists came together to produce" the open letter to Biden.

Cuba Archive, which tracks the political killings in Cuba, states that, as of December 2020, there were 9,222 "documented deaths and disappearances attributed to the Cuban revolution."

The full-page ad in the New York Times can be viewed here.