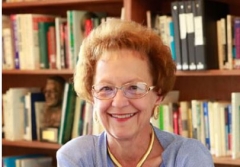 ALL President Judie Brown. (Screenshot, ALL)

(CNS News) -- In response to the U.S. Conference of Catholic Bishops (USCCB) issuing a statement that congratulates Joe Biden and claims he is the second U.S. "president to profess the Catholic faith," leaders at the American Life League said this proves that the organization is "a feckless, spineless, conglomerate of dead souls."

On Saturday, Nov. 7, Archbishop Jose Gomez of Los Angeles, the president of the USCCB, issued a statement that partly reads, "The American people have spoken in this election.... We recognize that Joseph R. Biden, Jr., has received enough votes to be elected the 46th President of the United States. We congratulate Mr. Biden and acknowledge that he joins the late President John F. Kennedy as the second United States president to profess the Catholic faith."

Joe Biden is a Catholic who supports abortion, gay "marriage," gay adoption, and allowing biological males (transgender "women") to play on real women's sports teams and use their locker rooms, all of which is contrary to Catholic moral teaching.

American Life League President Judie Brown said, "The USCCB has affirmed what many of us have suspected for many years, and that is that most Catholic bishops have no problem with a Catholic politician spitting at the face of Christ by supporting the vile murder of the preborn."

"Joe Biden is such a man; he claims to be Catholic, yet he gives 100 percent support for abortion every day of the week and in every manner of brutality against the innocent," said Brown. "The Catholic bishops have erred, and as a Catholic, I am ashamed of them."

ALL Executive Vice President Hugh Brown said, "The reality of the USCCB issuing a statement of congratulations to Joe Biden should not be a surprise to anyone. The USCCB is a feckless spineless conglomerate of dead souls. They are not the descendants of the Apostles."

"They are what St. John Paul II referred to when he wrote of the Anti-Church," said Hugh Brown.  "Every Catholic should shake the dust from his feet regarding the USCCB. Listen to them not. We must put our faith in Christ."

Jim Sedlak, executive director at ALL and a long-time activist against Planned Parenthood, said, "In issuing its congratulations, the USCCB calls on Catholics to COMPROMISE with regards to the law and public policy. For Catholics, the law is the Law of God as expressed in the 10 Commandments."

"Which commandments should we compromise on?" said Sedlak. "Perhaps God really didn’t mean 'Thou shalt not kill.' After all, Biden/Harris have spent all of 2020 telling us that, if elected, they would expand abortion in the United States. They also said they would restrict religious liberty."

"The clearest takeaway from the USCCB’s statement is the confirmation that they are now a political body issuing a politically correct statement," he said. "Calling on Biden/Harris to follow God’s law would have been more in line with the USCCB’s mission of aiding people to save their souls—a mission, it seems, the USCCB has sadly abandoned."

According to its website, the American Life League is the "nation’s oldest grassroots, Catholic, pro-life organization. Its president, Judie Brown, has led the organization since its 1979 beginning. She has served three terms on the Pontifical Academy for Life—appointed twice by Pope St. John Paul II and again by Pope Benedict XVI."

Members of the USCCB at one of the group's annual meetings. (Getty Images)