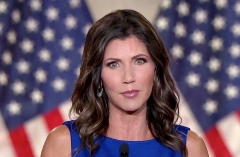 (CNS News) -- Although South Dakota GOP Gov. Kristi Noem, who promotes herself as a firebrand conservative, strongly implied she would sign legislation barring transgender "females" (biological males) from participating in real girls' sports -- and using their bathrooms, locker rooms and showers -- she delayed last week, did not sign the bill, and now wants changes that would essentially gut the legislation, according to the Alliance Defending Freedom (ADF).

The bill, H.B. 1217, was passed overwhelmingly by the South Dakota House and Senate, and Noem tweeted on Mar. 8, "In South Dakota, we're celebrating #InternationalWomensDay by defending women's sports! I'm excited to sign this bill very soon."

Everyone expected the apparently conservative Noem to quickly sign the legislation into law. But she delayed, and then last week it was learned that Noem was going to use her "style and form" veto power to partially gut the Fairness in Women's Sports bill.

"Gov. Noem had an opportunity to protect women and girls by signing the Fairness in Women’s Sports bill, but instead she pandered to the demands of special interests," said the ADF in a statement. "In what was an abuse of her ‘style and form’ veto power, she gutted protections for collegiate athletes and took away legal recourse for girls forced to compete against biological boys."

"We are shocked that a governor who claims to be a firebrand conservative with a rising national profile would cave to ‘woke’ corporate ideology," said the legal group.

“The governor tried to explain her betrayal with claims that her hands were tied by NCAA policy," reads the statement.  "But there is no NCAA policy that requires schools to allow males to compete on women’s teams as Gov. Noem suggests."

"The governor also vetoed the part of the bill that gives girls any legal recourse against unfair policies that arise," said the ADF. "What’s left is mere lip service for women and girls forced to compete against biological males."

“The governor intends to have a press conference launching an initiative Monday to control the damage to her credibility and political image," reads the statement.  "Politicians launch belated ‘initiatives’ for political theater and to create distractions."

"Our hope is that Gov. Noem will reverse course and make this right by signing the bill passed overwhelmingly by the South Dakota Legislature," said the group. "Anything less—including an ‘initiative’ promoted by a few athletes at a press conference—will be more empty words.”

On its website, the Alliance Defending Freedom is described as a "non-profit legal organization committed to protecting religious freedom, free speech, parental rights, and the sanctity of life."

American Principles Project President Terry Schilling said that Gov. Noem broke her word. “By standing with Joe Biden and the radical left against protecting women’s sports, Noem has irreparably damaged her standing with both her own constituents as well as Americans nationally who have been looking to her for bold leadership,” he said, as reported The Washington Times. “This betrayal will have political consequences.”

The South Dakota Chamber of Commerce and South Dakota Board of Regents reportedly lobbied Gov. Noem against signing the bill, according to The Blaze, alleging that it would hurt businesses in the state. Also, Democrat legislators have warned that if the bill becomes law, Amazon potentially could pull out of a deal to open a new fulfillment center in Sioux Falls.

In a Mar. 19 statement, Noem said, "Unfortunately, as I have studied this legislation and conferred with legal experts over the past several days, I have become concerned that this bill’s vague and overly broad language could have significant unintended consequences."

However, State Rep. Rhonda Milstead, a Republican who supports the bill, said, "Legislators are the ones who make the laws and the governor signs them. She’s gutting the bill and writing a new law and that’s not her job."