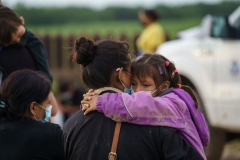 A migrant woman holds her daughter while waiting to be processed by the United States Border Patrol after crossing the US-Mexico border into the United States in Penitas, Texas on July 8, 2021. (Photo by PAUL RATJE/AFP via Getty Images)

(CNSNews.com) – The Biden administration is proposing paying a settlement of $450,000 each to hundreds of illegal immigrant families who were separated at the border during the Trump administration, which Lt. Christopher Olivarez with the Texas Department of Public Safety said will create an incentive for more migrants to cross the border illegally.

Olivarez told Fox Business’ “Mornings with Maria Bartiromo” on Monday that it is “another clear example of a complete failure of the federal government failure to act and take action on this border crisis.”

“Now they are thinking about incentivizing these individuals, these families who they claim were separated during the previous administration and now they want to pay them $450,000 per head,” Olivarez said.

“All that’s gonna do is it’s gonna entice these individuals, more migrants and especially large caravans to continue to make this journey to the southern border and not only that, the criminal organizations, the cartels are gonna exploit that messaging as well and tell these migrants now is the time to come because not only will it be let into the country but now you’re gonna be paid $450,000 per person,” he said.

“So again, a complete failure to act. It is unbelievable. It really is. I wish I knew the explanation behind it and what the motive is, but all you’re gonna do is open the floodgates. As it is they were open and they’ve been open, but now you’re gonna have more individuals, more migrants, more caravans making this journey to the southern border because of that messaging,” Olivarez said.

Cartels are making $100 million a week smuggling illegal immigrants across the southern border, and that’s not even narcotics, Olivarez said.

“I was in Del Rio last week. I was out there with our men and women who are working the rail yards, working these trains that are coming in, and we saw—we rescued individuals that were trapped inside cargo trailers, cargo tanks with no air circulation and of course extreme heat, but it just goes to show you that these smuggling organizations have no regard for these migrants that they’re transporting, because you have to keep in mind, and we talked about this when you were in del Rio, and we talked about how the cartels are exploiting the situation right now,” he said.

“They’re exploiting this crisis and how it's of low risk for them to move migrants across, because they get paid once they’re already in Mexico, so it's not a loss for them. They already got their money. They already got paid and now they’re gonna continue to exploit the situation,” Olivarez said.

“They’re gonna continue to smuggle these migrants further inland, and you’re gonna see different tactics and different methods by the organizations to move these people further inland, and one thing to keep in mind when we talk about the cartels, we’re just empowering cartels and with the resources that we’ve been able to talk to, our federal partners, these cartels are making well over $100 million a week just on human smuggling,” he said.

When asked where the Biden administration is on the Remain in Mexico policy, Olivarez said, “What I’ve heard and what I’ve gathered from our federal partners and some of our law enforcement, the boots on the ground is that it was an effective policy, and of course, we tried to not get too much involved with the politics, but the fact of the matter is that this worked. It was very effective, and I can tell you from a law enforcement perspective, we never saw the methods of these individuals being crossed.

“The empowerment that we’re allowing these cartels to profit off of - the money, the weapons, the drugs – it just makes them more powerful. We've never seen that before, and that's from a law enforcement perspective, and I can tell you right now again as we talked about earlier, and we continue to talk about is that there is no action, no viable solutions from the federal government to take care of this crisis,” Olivarez said.

“It seems like we’re taking away all the valuable resources from law enforcement and again they want to incentivize these individuals to make that journey. That's what we’re gonna continue to seeing and that's an unfortunate situation for law enforcement and especially our U.S. Border Patrol agents, because now they’re going to have to deal with the crisis until we see some drastic changes being made,” he added.