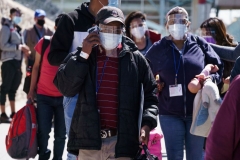 (CNSNews.com) - Texas Gov. Greg Abbott warned Friday that 10 percent of migrants at two different facilities in his state have tested positive for COVID-19.

Not only that, but one of those locations has unsafe drinking water that could be contaminated with arsenic.

Speaking to Fox News’s “America Reports,” Abbott said he just learned that not only is there a crisis at the border, but it’s “a humanitarian disaster.”

“They were using well water that the Texas commission on Environmental Quality has informed the federal government has not been proven to be safe. There's no telling what could be in there, including the possibility of arsenic. So the Texas Commission on Environmental Quality is evaluating the water, the running water, so there is no viable, usable running water at a location in Midland,” the governor said.

“So know this, and that's any time we are dealing with a massive amount of influx of people coming across the border, that would be a humanitarian crisis and a big challenge. Now knowing the magnitude of the spread of COVID in these areas, this is occurring during the course of a pandemic, and it’s endangering lives as we speak,” Abbott said.

Abbott’s office and Texas agencies have been in contact with the Health and Human Services Department as well as the Federal Emergency Management Agency (FEMA) “working with them on responding to this.”

He said that “the Biden administration is showing they were completely unprepared for this massive influx.”

“We also hear that they are looking at other locations in Dallas to deal with the consequences. We do not yet know what it involves, but what we do know is this. The Biden administration is unprepared for the size and the amount and number of people coming in as well as the COVID or the water, health challenges all these migrants are facing, so this is a total of disaster by the Biden administration,” Abbott said.

The governor raised the issue of whether the migrants transmitted COVID-19 in detention facilities as well as the possibility of Border Patrol agents spreading it to others throughout the community.

“Open border policies would always be a disaster, but open border policies during the time of a pandemic is even worse, so there’s all kinds of incalculable health care issues. Who all have these people who tested positive exposed themselves too? There are workers in these facilities who are adults who will leave there and go back into their communities. Might they be testing positive? Might they be transmitting COVID in their facilities? These are facts we need to know,” he said.

“The Biden administration needs to tell all of us where are these kids are from? What variants have they been exposed to that they could be transmitting that our state department health service needs to be able to respond to? There are so many questions that the Biden administration is simply not answering that leads to greater danger,” the governor said.

“Then of course the other disaster is the human trafficking component of all of this. All of these kids have been subjected to human trafficking on the pathway to the Texas border, and then they’re going to be taking that and going to other parts of the United States,” Abbott said.

“The border, that we are dealing with right now people think is the Texas border. It’s a border on every state border in the United States because they’re going to be taking these kids in Texas right now and flying them to other states across America,” he added.

When asked whether the Dallas facility that was reserved for migrant teen boys is overflowing yet, Abbott said, “So I'm just going to tell you what I have been told and that is I've been told that at each of these holding facilities that exist, the three holding facilities in Texas, they are expected to be there no longer than 21 days and they anticipate transporting them from those locations to other locations across United States.

When asked whether he’s seeing an uptick in crime since the border surge, Abbott said, “As far as the stats themselves are concerned, I would need to refer to the Texas Department of Public Safety. I can tell you that I have received an increased number of phone calls from ranchers in the region, talking about the way that the ranchers, their homes and their vehicles and other things have been completely destroyed.

“So there have been increased reports of crime. That’s a fact, and we will expect to see that going forward, but that's exactly why I deployed both 1,000 Texas Department of Public Safety officers as well as 1,000 National Guard to that region to restore safety and security in that region,” the governor said.