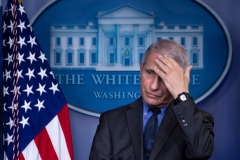 Director of the US National Institute of Allergy and Infectious Diseases Anthony Fauci listens to a question regarding a pause in the issuing of the Johnson & Johnson Janssen Covid-19 vaccine during a press briefing at the White House April 13, 2021, in Washington, DC. (Photo by BRENDAN SMIALOWSKI/AFP via Getty Images)

(CNSNews.com) - Sen. Ron Johnson (R-Wis.) said Sunday that Dr. Anthony Fauci, director of the National Institute of Allergy and Infectious Diseases, media arrogance, and social media censorship are to blame for sabotaging the use of some prescription drugs to treat COVID-19 and save lives.

“Well, Dr. Fauci happened. Media arrogance, social media censorship happened. That clip, that testimony from Dr. Korey, powerful testimony was viewed by 8 million Americans who weren't satisfied with the NIH guidelines of basically do nothing. They wanted early treatment. It was pulled by YouTube but we all know that Dr. Fauci he's not a modest man,” Johnson told Fox News’s “Sunday Morning Futures.”

“If you question what he did, apparently you're questioning science itself, but you can't look at how he stage managed the COVID crisis and call it anywhere close to a success,” the senator said, pointing out that 600,000 people died and there were “trillions of dollars of economic devastation.”

“He ignored early treatment. He probably helped sabotage the use of some of these things. You have to understand that Dr. Fauci, people in the health agencies, the media, the social media, they will never admit they were wrong on this because if they do they’re going to have to admit that literally hundreds of thousands of people didn't have to lose their lives but for their censorship, their arrogance and Dr. Fauci's mismanagement,” he said.

Host Maria Bartiromo asked Dr. Pierre Korey, chief medical officer of the Front Line COVID-19 Critical Care Alliance (FLCCC Alliance), about the drug Ivermectin, a drug made by Merck that has been on the market for a long time but is currently off patent, which means that pharmaceutical companies don’t make money off of it.

“That's correct. They do not make money off of Ivermectin anymore. That's an old drug. Many, many different manufacturers make it. Briefly, that is one of the oldest and safest drugs we have. It's been given all around the world for decades, 4 billion doses. That testimony that you played that I gave in December, the evidence was convincing then,” Korey said.

“It's now overwhelming, and just yesterday a paper by some of the top researchers in the world concluded that Ivermectin leads to a massive reduction in the amount of patients who are dying. We're getting reports from all over the world, from Mexico, that put it into their public health policy that huge numbers of patients are avoiding hospitalization and death in Argentina and in certain states in India,” he said.

“We know it’s working. It's working around the world, and nobody in the United States is hearing about it,” Korey added.

“So does this boil down to money then, Dr. Korey? I mean, this drug made by Merck, Ivermectin is off patent. They're not making money on it anymore but now Fauci says he's looking at a drug that's going to be a patented drug made by Merck. Aren't the underlying chemicals the same so now they're going to have it on patent so they can make a huge profit on it?” Bartiromo asked.

“Well, that is so clearly -- it's a glaring example of the system that we're in which is that for-profit medicines are favored to almost the total exclusion of nonprofit medicines, and so you see all of this money being thrown at pharmaceutical companies to develop new therapies when we already have existing repurposed drugs that are highly effective,” Korey said.

“They will never develop a drug that is more effective than Ivermectin. I find it absurd. Our government just gave -- committed over $4 billion in two different areas this week to try to find an oral anti-viral early treatment therapy. We have it now. We can save so many lives. This is a treatable disease. We've identified that drug, and it needs to be systematically deployed throughout the healthcare system,” he said.

“Well, again, just what I've been saying for well over years. I've been trying to alert Americans to the fact that there are early treatment options and try and find them. They pulled that off, and by the way, Maria, if it weren't for Fox Nation, if you had to rely on YouTube, this segment right here would be censored immediately on YouTube. Think of that,” the senator said.

“The other thing that Dr. Fauci and the media is ignoring right now is the early warning signals of the Vaccine Adverse Effect Reporting System. We have close to 5,000 deaths, over 1700 within day zero, one and two of getting vaccinated. We have thousands of people with permanent disabilities - 20,000 hospitalizations,” Johnson said.

“That quite honestly compares to less than 200 deaths per year through the entire 30-year history of the VAERS system with other vaccines. They’re not paying attention. They're suppressing this information, and the American people are paying the price,” he said.

Bartiromo said that when she spoke with Korey over the weekend, the doctor said it’s “analogous to penicillin.”

“You think this is the biggest coverup of all. What a massive, massive impact with 600,000 of our fellow Americans dead right now because they were told not to have a treatment for COVID,” she said.

“You know, it's inexcusable. I mean, my group -- again, my opinions are not just my own. I'm part of a group of the most highly credentialed, highly published doctors in my specialty. We've made numerous contributions over decades, and we did the work. We did the research, and we identified all of the evidence behind this. It shows our agencies ignored drugs such as this, and it’s caused incalculable harm. Again, we identified the solution,” Korey said.

“Real quick, on the paper that was dropped last night. What do you want to say about what we learned from this white paper from the science in terms of Ivermectin?” Bartiromo asked.

“They reviewed dozens of randomized controlled trials, and in the most accurate statistical analysis, they’re estimating that 62% less deaths would occur. That's the minimum of what Ivermectin is capable of, because not all of them were early treatment. Again, the key is early. The benefits that we’re seeing from early treatment are massive. They prevent people from going to the hospital and dying,” Korey said.

“I just want to say obviously over 100,000 patients’ lives would have been saved had the NIH instituted Ivermectin when we presented it to them in early January. If they had done what Mexico did, over 100,000 American lives would have been saved, and around the world if they had followed our lead, we're talking about over a million lives based just on that paper,” he said.