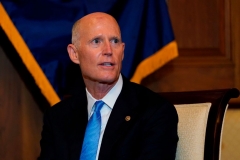 (CNSNews.com) - Sen. Rick Scott (R-Fla.) told Fox Business’s “Varney and Company” on Tuesday that while he supports giving stimulus money to the people who have lost their jobs, small businesses, and schools, he will not support Florida paying for states that don’t know how to live within their means.

When asked if he supports a stimulus bill bigger than $2.2 trillion as the president requested, Scott said, “But we don't know what is in the package. What is frustrating is Pelosi and Schumer don't want to do a deal. We passed a bill. We worked all of August - Republican senators did. We passed a bill the first part of September.

“We're gonna do it again this week to say let’s help the people that lost their jobs. Let's help the small businesses. Let's help get our schools open. Let’s put more money for testing, vaccine, post office. Guess what, the Democrats keep blocking it. So I agree with the president. We need to go help Americans that have gotten hurt, but I’ll tell you what I’m not going to do,” he said.

“I made sure Florida taxpayers didn't see a tax increase, and we balanced our budget, paid down our debt. Florida taxpayers are not going to pay for New York and California and Illinois and New Jersey,” Scott said.

Host Stuart Varney asked whether Scott is prepared to get leaned on and vote for a big package if that’s what the president wants.

“And by the way, Joe Biden was part of the administration that appeased the Castro regime and appeased Maduro and won't hold Xi accountable in China. None of those issues work well in Florida. So Trump’s going to have a win. I'm glad people are getting out to vote. I already cast my vote. I did absentee ballot. My wife did absentee ballot. So we want to make sure Trump has a big win,” he said.

“It is absolutely booming in Florida. My question is, supposing Biden wins? Maybe you should root for Biden, because if he does win, the flood to Florida becomes an absolute tsunami,” Varney said.

“They’re coming down. When I was elected governor in 2010, people were leaving the state for a few years. We added 1.7 million jobs. By the time I finished, 400,000 to 500,000 were moving to Florida, and it used to be people said you go to Florida for the weather,” Scott said.

“Now lower taxes, 49-year low on the crime rate, according to U.S. News and World Report, great education system, great K-12 system. So people are coming down there because it is safe. We believe in capitalism in Florida. We're not big socialists in Florida, because a lot of people from Florida have watched what happened in Cuba, What's happened with Maduro in in Venezuela and Ortega in Nicaragua. So we believe in the free market in Florida,” he said.