Psaki: ‘Threats and Violence Against Public Servants Is Illegal’ 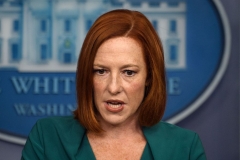 (CNSNews.com) -  The National School Board Association sent a letter last week to President Joe Biden asking him for federal assistance citing “the growing number of threats of violence and acts of intimidation occurring across the nation” from parents upset about mask mandates for schools and the inclusion of critical race theory curriculum.

The letter cited more than 20 instances of threats, harassment, disruption, and acts of intimidation that have transpired during school board meetings and that are targeted at school officials.”

“Coupled with attacks against school board members and educators for approving policies for masks to protect the health and safety of students and school employees, many public school officials are also facing physical threats because of propaganda purporting the false inclusion of critical race theory within classroom instruction and curricula,” the letter stated.

“This propaganda continues despite the fact that critical race theory is not taught in public schools and remains a complex law school and graduate school subject well beyond the scope of a K-12 class,” it added.

“As these acts of malice, violence, and threats against public school officials have increased, the classification of these heinous actions could be the equivalent to a form of domestic terrorism and hate crimes,” the association wrote in the letter.

The NSBA asked for “a joint expedited review” by the DOJ, DHS, and the Education Department. It also asked that the review “examine appropriate enforceable actions against these crimes and acts of violence under the Gun-Free School Zones Act, the PATRIOT Act in regards to domestic terrorism, the Matthew Shepard and James Byrd Jr. Hate Crimes Prevention Act, the Violent Interference with Federally Protected Rights statute, the Conspiracy Against Rights statute, an Executive Order to enforce all applicable federal laws for the protection of students and public school district personnel, and any related measure.”

In response, the Justice Department announced Monday that Attorney General Merrick Garland “directed the FBI and U.S. Attorneys’ Offices to meet in the next 30 days with federal, state, Tribal, territorial and local law enforcement leaders to discuss strategies for addressing this disturbing trend.”

“Threats against public servants are not only illegal, they run counter to our nation’s core values,” Garland said in a statement. “Those who dedicate their time and energy to ensuring that our children receive a proper education in a safe environment deserve to be able to do their work without fear for their safety.”

When asked whether the administration considers parents who are upset about their children’s curriculum to be domestic terrorists, White House Press Secretary Jen Psaki said Wednesday that threats and violence against public servants, particularly school board members, is illegal.

Fox News White House Correspondent Peter Doocy asked, “A week ago, the National School Boards Association wrote to the president to say that their teachers feel like some parents protesting recently could be the equivalent to the form of domestic terrorism, and then the attorney general put the FBI on the case, so does the administration agree that parents upset about their kids’ curriculums could be considered domestic terrorists?”

PSAKI: Well let me unravel this a little bit, because the National School Board Association is not a part of the U.S. government. I’d point you to them. What the Department of Justice said in a letter from the attorney general is that ‘threats against public servants are not only illegal, they run counter to our nation’s core values.