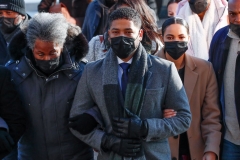 Jussie Smollett (C) arrives at the Leighton Criminal Court Building for closing arguments in his trial on disorderly conduct charges, on December 8 2021 in Chicago, Illinois.  (Photo by KAMIL KRZACZYNSKI/AFP via Getty Images)

Fox News White House Jacqui Heinrich pointed out that both President Joe Biden and Vice President Kamala Harris rushed to judgment in the case, believing that Smollett was actually attacked by Trump supporters as the actor alleged.

“I think there are lessons learned perhaps for everybody who commented at the time, including former President Trump. I wish April Ryan was here, because I think she asked him the question. Do I see her somewhere? Or no. Okay. She just left. Where he said, I can tell you that it’s horrible. It doesn’t get worse, in response to her question about Jussie Smollett at the time,” Psaki said.

“I would say that we respect the jury’s decision. Lying to the police particularly about something as heinous as a hate crime is shameful. Instances of that need to be investigated fully, and those found guilty need to be punished, and false accusations divert valuable police resources away from important investigations,” the press secretary said.

“They make it harder for real victims to come forward and be believed. If you look back at the time, it’s also true and important to note that accusations of hate crimes should be taking seriously, and they need to be fully investigated, but that’s where everybody was looking at it at the time, but certainly knowing what we know now, it’s important to also note the danger of lying to police and lying about hate crimes and the fact that it diverts important resources,” she said.