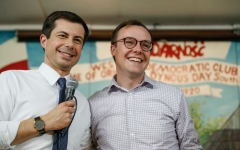 (CNSNews.com) – Chasten Buttigieg, the husband of Transportation Secretary Pete Buttigieg, told CNN that a bill that a House committee in Florida passed, which bans discussions of sexual orientation and gender identity in schools “will kill kids.”

“This will kill kids, @RonDeSantisFL. You are purposefully making your state a harder place for LGBTQ kids to survive in. In a national survey (@TrevorProject), 42% of LGBTQ youth seriously considered attempting suicide last year. Now they can't talk to their teachers?” he tweeted last week.

When asked how the bill will “kill kids,” Chasten Buttigieg said, “That's a staggering number. So the tweet I put out mentioned a survey by the Trevor project in which 42% of LGBTQ kids, kids who were comfortable enough to take the survey, said they have seriously considered taking their own life.

“And we should be approaching that number with urgency and with compassion and care wondering what we're doing, what kind of country we're building in Florida, what kind of state are you’re building where you're essentially pushing kids back into the closet and saying we can't talk about you, we can't even talk about your families,” he told CNN’s “New Day” on Tuesday.

When asked what happens if a child in Florida says, “I have two daddies” in class, Buttigieg said, “I’ve wondered that. I’ve wondered that about the text of the bill if kids come into the classroom Monday morning and they’re all talking about their weekends and hypothetically a kid like mine says I had the best weekend with my dads. We went to the zoo.

“We went and got ice cream. Is the teacher supposed to say, hey, hey, hey, we don't talk about things like that in this classroom? Not only what does that do to kids like mine, but what does it do a kid in the classroom who might be starting to realize they're different? What this bill is essentially doing is pushing LGBTQ families back into the classroom and teaching LGBTQ kids that something is wrong about them,” he said.

Host John Berman pointed out that the bill’s supports say it’s about parental rights and that one of the bill’s provisions is that it makes schools legally liable.
“They can be sued, I think, if a teacher or a school administrator doesn't tell a parent if it learns that a student is gay. What's the impact there?” Berman asked.

“Yeah. I'm a little confused by the bill, too. I don't know if you looked at it, but I think the language is a bit broad. So it kind of sounds like you might be responsible for outing kids if they're straight, too. I just want to focus on teaching as a teacher. I don't want to be calling out my parents every night saying, hey, I wonder if you knew your kid was straight,” Buttigieg said.

“School should be a place where definitely where kids feel they can be themselves and they feel safe enough to be themselves, but I don't really think this is about parent's rights. Parent's rights to do what? To tell LGBTQ kids they don't belong? To push LGBTQ families away and into the closet?” he asked.

“Hypothetically. having a bake sale on Friday, would my husband and I not be welcome at the school because we're in a same-sex relationship? I just don't think this is what the governor should be focusing on. I think this hurts kids. This will hurt families and this isn't about education or parent's rights. I think it's about using the LGBTQ community as a scapegoat which we've been used as multiple times throughout history, and I just don't agree with it,” Buttigieg said.