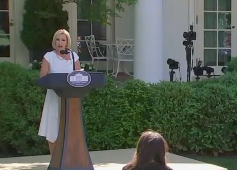 (CNSNews.com) - The United States and the Trump administration “will recover all” in spite of the coronavirus, Pastor Paula White said at the National Day of Prayer commemoration Thursday at the White House.

She was inspired by David’s ordeal as described in the Bible where in the town of Ziklag, his wives and children were taken and the city was burned down. David prayed to God, and God told David to “go after them, and you shall without fail recover all.”

White began her remarks by saying, “It is a beautiful day to lift up our Lord and savior. He is a certain God in uncertain times. The Bible says if two or three of us agree as touching anything, it will be done. Job 22 verse 28, says if you decree a thing and declare a thing, it will be established. So, God, we come in agreement with your word and with your name, the name of Jesus.

“Psalm 40:17 says you are my help and my deliverer. Do not delay, oh, God. I declare, no more delays to the deliverance of COVID-19. No more delays to healing and a vaccination. No more delays to restoration of this great nation, the United States of America. For Psalms 71:2  says in your righteousness, deliver us and rescue us, incline your ear and save us.

Psalm 107 says, you deliver us out of distress and out of destruction. Your word will not return void, according to Isaiah 55:11. So I declare your word. I declare divine intervention and supernatural turnaround. You will restore this land. According to Psalm 118: 25, save our nation oh Lord and send prosperity now. For Deuteronomy 28:8 says command your blessing upon this land.

You said in Deuteronomy 8:9 to bring us into good land without any lack, for your word declares in Psalm 33:2 blessed is the nation whose God is Lord. So I declare to you right now to be Lord over this nation, over the United States of America, and we receive your blessing over any plague, over any economic distress.

You will stay the hand of the enemy, according to 2nd Samuel chapter 21:16. When 70,000 men died by a plague, David cried out as he covered himself in prayer. And the Lord answered and said, it is enough. Stay now thine hand. Lord, let that be the cry today. Let that be your answer. Lord, enough coronavirus, enough to death, enough to fear, enough to poverty. We pray over President Trump and first lady, vice president and second lady and his administration. I declare Psalm 89: 21.

Let your hand establish President Trump and let your arm strengthen him. I declare Psalm 98:1 that your right hand and your holy arm will give them victory. We declare victory in the name of Jesus. Isaiah 58:11 says guide him continually. You said in Psalm 78:72 that you would guide him by the skillfullness of your hand.

You declared in Psalm 43 that send out your light and truth and let him lead his household, his administration in the name of Jesus. Now Lord, we pray for your mercies, for they are new every single day, and every morning, your mercies are new. Your steadfast love never ceases. I declare new mercies for hospital workers, new mercies for doctors and nurses, moms and dads, pastors and clergies, CEOs and employers, for the president, vice president.

God, your love is steadfast, and it endures forever. So right now, wrap your arms of love around every person who is hurting, every person who is confused, scared, tired, weary, sick, lonely. Let them know your love. Let them know that you will never leave them, and you will never forsake them. And in conclusion, I declare Isaiah chapter 43:19. I ask the Lord to do a new thing in our nation by giving waters in the wilderness and streams in the desert. Malachi 4:2 says Jesus arise over the nation with healing in your wings.