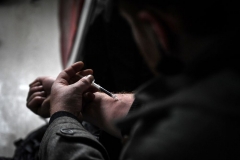 (CNSNews.com) – Oregon voters voted by a wide margin Tuesday to decriminalize all drug possession, making it the first state to do so.

Measure 110 calls for possession of small amounts of heroin, cocaine, and other illegal narcotics to be decriminalized and treated like a civil violation. Those caught would not be arrested, jailed or be subjected to a trial. They can either pay a $100 fine or complete a health assessment at a drug treatment center.

Addiction recovery centers will be paid for by revenue from legalized marijuana sales.

The measure will take effect on Feb. 1.

Drug sales and manufacturing will still be illegal.

As CNSNews.com previously reported, the measure was backed by the Oregon Nurses Association, the Oregon chapter of the American College of Physicians and the Oregon Academy of Family Physicians.

Opponents of the measure say it “recklessly decriminalizes possession of the most dangerous types of drugs (and) will lead to an increase in acceptability of dangerous drugs.”