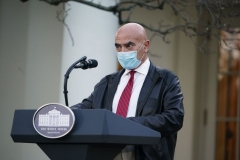 Dr. Moncef Slaoui, vaccine expert, delivers an update on "Operation Warp Speed" in the Rose Garden of the White House in Washington, DC on November 13, 2020. (Photo by MANDEL NGAN/AFP via Getty Images)

(CNSNews.com) – When asked whether someone who gets vaccinated against the coronavirus and is no longer at risk of serious illness can still spread the virus, Operation Warp Speed Chief Scientific Adviser Dr. Moncef Slaoui said Sunday, “We don’t know.”

“After you have been vaccinated -- let's say I get vaccinated. Will I still be able to spread the virus, even if I no longer am at risk of serious illness?” CNN’s Jake Tapper asked.

“We don't know the answer to that very important question. I think, given the level of efficacy achieved, that most people will control the virus, to the extent that they will not be infectious to others, but we yet have to demonstrate that,” Slaoui said.

“That work, we may have a first answer to it somewhere in February/March from the trial that we have conducted already, further analysis and some analysis in blood and things like that, but there are also -- we're discussing clinical trials where we may be able to assess whether people actually, on a daily basis, shed virus or stop shedding the virus when they have been immunized and exposed to this -- to the infection,” he said.

When asked how long immunity will last in the body of someone who gets vaccinated and whether it will be a seasonal vaccine like a flu shot, Slaoui said, “So, again, only time will really demonstrate and generate the data for us to know the answer to that question. My opinion, based on science and experience I have, is that this vaccine effectiveness will be long-lasting, because one of the hallmark of our immune system is, it has memory.

“It remembers everything we learned. It learned, and when it sees the virus again, it responds to it much, much faster than when it sees it the first time. I think that process of memory is likely to prolong our protection for probably a few years, and maybe many, many years,” he said.

Slaoui cast doubt on whether a yearly COVID-19 vaccination is necessary.

“Maybe the most weak people, in terms of their health, the very old people, may require a booster every three or five years, but I don't think this will be a yearly vaccine,” he said.

Slaoui addressed concerns by former Vice President Joe Biden that the Trump administration doesn’t have a plan to get the vaccine from the syringe into people’s arms.

“There are plans. There are videos that describe how to do it, because these are special conditions, given the cold chain, very cold, particularly with the Pfizer vaccine. We haven't had a chance yet to sit down with the transition team and explain in detail everything that has been planned and been done. We look forward to that happening,” he said.

“We actually, I think, have a meeting planned later this week, and I'm confident that, together, we will do the best we can to make sure the vaccines are delivered safely and effectively to all Americans,” Slaoui said.

When asked how soon results will be seen in terms of bringing down the death toll and hospitalization numbers, Slaoui said that the Centers for Disease Control and Prevention (CDC) recommends that a vaccine be used in health care workers and in long-term care facility people, but about 40 to 50 percent of all deaths happen in the elderly who are in nursing homes.

“We should be able to have immunized that full population and the health care workers that take care of them by the end of the month of December or by the middle of the month of January,” Slaoui said.

“The vaccine efficacy, as we have seen it, actually starts reasonably quickly after the first dose of vaccine, and then is further maintained with the second dose, and, therefore, I am hopeful that, by the end of the month of January, we should already see a quite a significant decrease in the mortality and severe morbidity associated in the elderly population,” he said.

“There are, of course, many other people, unfortunately, that have comorbidities that live outside of care facilities, that it will take more time to immunize them. By the month -- the middle of the month of March, we should have really covered most of the highly susceptible population, about 100 million people,” Saloui said.

Tapper asked Slaoui what challenges made his initial goal of delivering “a few hundred million doses of vaccine by the end of 2020” unachievable. Instead, the administration plans to ship 40 million doses initially.

“Frankly, the goal was barely achievable. I described it as, it's credible, but incredibly challenging, to achieve it. The hardest piece in it, frankly, was to identify the vaccines, do the phase three trials, and scale up and do the manufacturing. I think the phase three trials and the demonstration of efficacy have been helped, in part, unfortunately, by the strength of the pandemic,” Slaoui said.

“There has been so much transmission that the trials completed faster than they would have if we had less disease. On the manufacturing side, it's turned out to be somewhat more complicated and more difficult than we planned. We probably are six or eight week later than an ideal scenario, where we had 100 million doses by the end of this year, but we are not far, and we will work very hard,” he said.

“One thing I want to emphasize, if I may, which is, we are manufacturing here biological products. We are not manufacturing a watch or a little phone. This is not an engineering problem. This -- these are biological problems. They are extremely complex, and we don't control 100 percent of everything as it happens. There will be small glitches. That's what happens all the time,” Slaoui said.

“We have introduced a risk management layer in our communications, saying, let's say, if we say we will have 100 million people vaccinated by the end of March or mid-March, maybe we could do that by early March. However, there may be some batches of vaccine that don't make it on time, that are delayed, that are not right, particularly in the beginning, in the next two months or three months,” he said.

“So, we need to be just aware that this is very complex. We are doing the best we can, but this is not mathematics. This is biologic,” Slaoui added.

Tapper noted that less than half of black Americans polled say they will get vaccinated. When asked how Operation Warp Speed intends to address the disproportionate skepticism in the black community, Slaoui said, “Well, it's a very important and saddening situation that has been worrying us all the time.

“And we work very, very hard with the NIH leadership, with the surgeon general, with all the leaders that we could to engage the minority population, in particular, the African-Americans and the Latinx, to participate into the clinical trial, to understand the importance of participating through the trials, because that will be very important to helping us convey to the minority population the safety and the efficacy of these vaccines,” he said.

“Nobody is being used as a guinea pig. Unfortunately, this virus is impacting the African-American population and the Hispanics two and four times more than it does to the Caucasian part of our country, and we have to stop that. It's really very, very important that people take the time to listen to the data, listen to the people they trust that have some expertise,” Slaoui said.

“Please don't make your opinion outside of having listened to the data and to experts you trust. When that happens, I feel confident you will agree to be immunized, and that can help save your life,” he said.