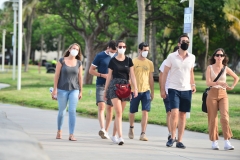 People seen walking on the beach side walk some wearing mask and some not wearing a face mask on July 06, 2020 in Miami Beach, Florida. (Photo by Johnny Louis/Getty Images)

(CNSNews.com) – Miami-Dade County Mayor Carlos Gimenez told CBS’s “Face the Nation” on Sunday that “the protests had a lot to do” with the spike in COVID-19 cases in Florida.

“So you do trace it to the protests, because we just heard the mayor of Houston say that was not it. It was the restaurants, the businesses and people gathering in those kind of situations,” host Margaret Brennan said.

“No, I think it's all the above. I think, obviously, the protests had a lot to do with it. We had, you know, thousands of young people together outside, a lot of them not wearing masks, and we know that when you do that and you are talking and you are chanting et cetera, that really spreads the virus,” Gimenez said.

“So absolutely, the protests had something to do with it, but also our people, our residents, you know, did not-- I think they let their guard down and started to socialize, and, again, that also had to do with it. So it's all the above. I'm not saying it's just that, but it was a contributing factor,” he said.

The mayor said that residents “let their guard down around late May, early June, and also some of the protests that we had here, I think contributed to it.”

“So we saw a rapid rise in young people in getting-- being positive to COVID-19 around mid-June, and I think that that had a lot to do with probably socializing, young kids going to parties, maybe graduation parties at homes, because it's been pretty locked down here for some time. We have a strict mask order inside. When you're inside since April 19th, you're supposed to wear a mask,” he said.

“You're supposed to wear a mask when you're outside unless you can maintain social distancing. We changed that now to wearing a mask all the time. We shut down the beaches this weekend. We restricted alcohol sales. We've also closed, again, some of the places where people can congregate like movie theaters and bowling alleys and casinos and all that, because we have seen a sharp rise in the positivity rate, just like they have in Houston,” Gimenez said.

When asked who in Miami was getting sick and how sick they’re getting, the mayor said that there was a study done in Miami-Dade a couple months ago that said over 200,000 people “had already had the virus or had the virus at the time.”

“So our official number is maybe 40,000 have officially had it. What concerns me is the positivity rate. We had it down to about eight percent of the people getting tested were showing up positive. Now they're over 20 percent are showing up positive. That's the problem for us, and so we have seen because we've seen an increase in contradiction to your very stringent guidelines now,” he said.

“And how ill are they getting with hospitalizations and the degree of lethality to this? Because last week you were on Fox News and you said the good news here is that it's not as lethal as people think it is. That seems in contradiction to your very stringent guidelines now,” Brennan said.

Gimenez said they have more people diagnosed as positive for COVID-19, “and so the more you have at the end, you're going to have more people, you know, pass away, unfortunately, because it's just a question of numbers, and so we do have a lot of young people that have gotten positive results.