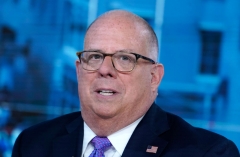 (CNSNews.com) - Maryland Gov. Larry Hogan told NBC’s “Meet the Press” on Sunday that the Trump administration did “an excellent job of communicating with all of the governors from the beginning” of the pandemic, but he said “there’s no question that mistakes were made” and there should have been “a national testing strategy.”

When asked why the United States is in a worse position than Europe, Hogan said, “First of all, yes, we’re on, we are now doing weekly calls. It started out, I think, a couple of times a week, and I'll give the administration credit for this: they've done an excellent job of communicating with all of the governors from the beginning of the crisis.

“Almost all of the nation's governors are on these video conference calls with -- sometimes the president, but typically the vice president runs these calls with the coronavirus task force, many of the cabinet members, and they try to keep us up to date,” the governor said.

“And I think governors had to step up and be on the front lines, but we had 50 different states with 50 different strategies, and some did better than others,” Hogan said.

“Well, look, I don't want to spend a lot of time just criticizing in the middle of the crisis, because I don't like to Monday morning quarterback, but I haven't been afraid, obviously, to speak up when I thought something was wrong or when I thought that they were off on the wrong direction, and I'll continue to do so,” Hogan said.

“We've got to deal with the situation at hand, and we've all got to do the best job we can, because this thing is out of control. It's by no means behind us, and we're all in it together and we've got to work together at the federal, state and local level,” the president said.

Hogan said that Maryland could up schools up five days a week in person if they wanted to, “but we also want to do it and make sure that our kids are going to be as safe as possible.”

“So, we're not going to be rushed into this. From the beginning of this crisis, we've always been working very closely with our doctors, our scientists and our epidemiologists to make sure that we're doing the things that make the most sense, and our state superintendent of schools, we'll be sitting down this week to get a report from her,” the governor said.

“She's been meeting with all of the local jurisdictions and with all of the top health professionals, getting all the stakeholders' input, and we're going to come up with a plan that is probably going to be a hybrid that talks about how we're going to provide the best education we can for our kids and do it in a safe way,” he said.