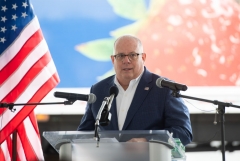 (CNSNews.com) – Maryland Gov. Larry Hogan called Minneapolis police officer Derek Chauvin, who faces murder charges for kneeling on the neck of George Floyd during a police arrest, “a murderer in a police uniform.”

“This one case obviously is a -- this was a murderer in a police uniform. There's no question about that. This is totally unacceptable, and it's not the only case of a bad cop, but, no, I also -- I believe that the vast majority of cops are good and do a wonderful job protecting the community, but we have got to have these conversations and figure out what the issues are that we have to address,” he told CNN’s “State of the Union with Jake Tapper” on Sunday.

The governor said that President Donald Trump’s tweet saying, ‘When the looting starts, the shooting starts" was “inflammatory.”

He said “one of the most important things that a leader can do right now,” which he went through with the riots in 2015 in reaction to the death of Freddie Gray, is to “try to lower the temperature.”

“It's not lowering the temperature. It's sort of continuing to escalate the rhetoric, and I think it's just the opposite of the message that should have been coming out of the White House,” he said.

Hogan said he dealt “decisively and quickly” with the riots in Baltimore in the fallout of Freddie Gray’s death while in police custody.

“Within a couple of hours, we sent in 4,000 members of the National Guard and 1,000 extra police officers to try to maintain peace and to protect the citizens of Baltimore, the vast majority of whom were protesting peacefully, which is what I think we're seeing in many cities across America, but we had a smaller element who was burning and looting, and we were trying to stop that violence, and we did it very successfully,” he said.

“After the first few hours, there was no more burning or looting or violence. Nobody else got hurt, but we let the people protests go on for a solid week in Baltimore, and I immediately went to the city. I walked the streets of Baltimore for a week, talked with leaders in the community,” the governor said.

“And I think my advice to these leaders in other states would be to not let the situation get out of control. Our theory was kind of peace through strength. We did not let it escalate to violence, where crowds were overpowering police, but we separated the violent acts and the destructive acts from the peaceful protesting,” Hogan said.

“And we tried to get in there and communicate with the citizens, and, frankly, many of the people in the community are also trying to stop the violence and all of the bad activity that's taking place. They don't want to see it, and it's not really helpful to any part of the situation,” he said.

As to whether there is a problem of systemic racism in law enforcement in the U.S., Hogan said, “We’ve got a consent decree in the city of Baltimore that came out of the situation with Freddie Gray in 2015 to try to get to the root causes and problems. I think we have got issues that have to be addressed, and it's a conversation we need to continue to have. There certainly are some issues and problems.”

Host Chris Wallace pointed out that just two weeks ago, Maryland was under a stay-at-home order.

“And now we have seen residents of your state taking to the streets, obviously, in large groups. It's hard to describe these protests, even if they are righteous, as in a line with the ideals of social distancing. Are you concerned, as a health matter, that these protests could be spreading the virus? And what might that mean for your state in June or July?” Wallace asked.

“Well, we're a little bit concerned about that. Right now, the immediate concern is to lower the temperature, stop the looting, and potentially keep our citizens safe from the riots that are going on, but the next step is to worry about this, what we have been focused on for the past couple of months, is the safety -- dealing with this coronavirus,” Hogan said.

“And there's no question that, when you put hundreds or thousands of people together in close proximity, when we have got this virus all over the streets, is -- it's not healthy,” the mayor said.

“There's about a 14-day incubation period. So, two weeks from now across America, we're going to find out whether or not this gives us a spike and drives the numbers back up again or not, but we went from a stay-at-home order. Most states in America had rules about no crowds of 10 or more, and now we're seeing thousands of people jammed in together in close proximity,” Hogan said.