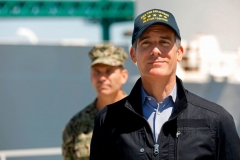 (CNSNews.com) – Los Angeles Mayor Eric Garcetti blamed climate change for wildfires that have been raging throughout his state, even though at least one was blamed on pyrotechnics from a gender reveal party and several people have been arrested for arson in connection with wildfires in California, Oregon, and Washington state.

Garcetti was responding to criticism from President Donald Trump that the wildfires are about forest management.

“Well, I listen to fire professionals, not the president of the United States or a politician, when it comes to actually what causes these fires. It's been very clear that years of drought, as we're seeing - whether it's too much water and too much rain in parts of our country right now or too little, this is climate change,” he told CNN’s “State of the Union with Jake Tapper” on Sunday.

Garcetti said the Trump administration has its “head in the sand, while we have Democratic and Republican mayors across the country stepping up to do their part.”

“This is an administration, a president who wants to withdraw from the Paris climate accords later this year, the only country in the world to do so. Talk to a firefighter, if you think that climate change isn't real, and it seems like this administration are the last vestiges of the Flat Earth Society of this generation,” the mayor said.

“We need real action. We need to actually reduce the carbon emissions that we have, and we need to make sure we can manage that water, and this is not about just forest management or raking. Anybody who lives here in California is insulted by that, quite frankly, and he keeps perpetrating this lie,” Garcetti added.

Meanwhile, four people were arrested for arson in connection with at least four separate wildfires in California, Oregon, and Washington.

One woman in California - Anita Esquivel – was arrested for starting fires near Highway 101, though the number of fires was not released, Fox News reports.

Another man - Michael Jarrod Bakkela – was arrested and charged with two counts of arson for setting one of two major wildfires in Oregon, killing at least two people from that fire. The fires have merged, killing at least 24 people, the Daily Wire reports.

Two more people were arrested for arson in Washington. The FBI is denying reports that any of the suspects have ties to Antifa."

When asked if Biden is on the wrong side of the issue, Garcetti said, “Well, it's very clear to all of us that we have to wind down our dependence on fossil fuel, from Joe Biden through myself and mayors across the country and across the world.

“You look at the markets. They're not investing in any new oil and gas projects, and when they do, it costs three times as much in terms of the interest rates as renewables. So, I think we know where we're headed, and Joe Biden has put probably the boldest plan I have ever seen in my lifetime, to be, by 2035, carbon-neutral for all of our electricity generation. That's a bigger and braver and bolder goal than I have ever seen,” he said.

“I think he was referring to what's existing today, whether it gets shut off or whether we rapidly wind it down,” the mayor said.

“That's clear to me, that all of us, in a decade-and-a-half, will be looking at, as we have here in California, where L.A. is the number one solar city in America, where we are investing in renewables, where we have sold power, actually, during some of the outages to the rest of the state, that we can do this and create jobs, and I think Joe is committed to that transition, and that's what he's talking about, those folks who work there today, making sure they have a job tomorrow,” Garcetti said.