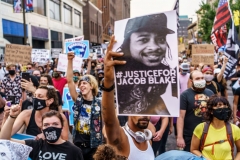 Protesters march near the Minneapolis 1st Police precinct during a demonstration against police brutality and racism on August 24, 2020 in Minneapolis, Minnesota. - It was the second day of demonstrations in Kenosha after video circulated Sunday showing the shooting of Jacob Blake -- multiple times, in the back, as he tried to get in his car, with his three children watching. (Photo by KEREM YUCEL/AFP via Getty Images)

(CNSNews.com) – The mother of Jacob Blake Jr., a black man was shot in the back seven times in Kenosha, Wis., as he tried to get back into the car during a police encounter, said despite she’s praying for law enforcement and their family, and she challenged everyone to examine their hearts.

Blake was reportedly shot while his three sons, ages 3, 5, and 8 were in the car at the time. He’s recovering in the hospital, but he was paralyzed.

His mother, Julia Jackson, condemned the rioting taking place in the city after her son’s shooting and said she’s praying for the police.

The governor declared a state of emergency in Wisconsin on Tuesday because of the damage done by protesters, who vandalized businesses and set multiple buildings on fire.

Jackson said that as she rode through the area and saw the damage caused by rioters in her son’s name, she thought about how her son wouldn’t want that.

“We really just need prayer. As I was riding through here, through the city, I noticed a lot of damage. It doesn't reflect my son or my family. If Jacob knew what was going on as far as that goes, the violence, and the destruction, he would be very unpleased,” Jackson said at a press conference on Tuesday attended by Blake’s family.

“So I’m really asking and encouraging everyone in Wisconsin and abroad to take a moment and examine your hearts. Citizens, police officers, firemen, clergy, politicians, do Jacob justice on this level and examine your hearts. We need healing. As I pray for my son’s healing physically, emotionally, and spiritually, I also have been praying even before this for the healing of our country,” she said.

“God has placed each and every one of us in this country because he wanted us to be here. Clearly you can see right now that I have beautiful brown skin, but take a look at your hands and whatever shade it is, it is beautiful as well. How dare we hate what we are. We are humans. God did not make one type of tree or flower or fish or horse or grass or rock. How dare you ask him to make one type of human that looks just like you,” Jackson said. 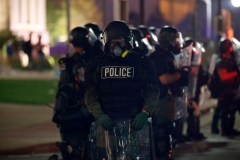 Kenosha County police officers in riot gear stand in front of the County Court House during demonstrations against the shooting of Jacob Blake in Kenosha, Wisconsin on August 24, 2020. - Police faced off with hundreds of peaceful protesters ahead of a curfew in this city in Wisconsin Monday, as rage grew once more in the US at the shooting of a black man by a white officer. (Photo by KAMIL KRZACZYNSKI/AFP via Getty Images)

“I'm not talking to just Caucasian people. I am talking to everyone - white, black, Japanese, Chinese, red, brown. No one is superior to the other. The only supreme being is God himself. Please, let's begin to pray for healing for our nation. We are the United States. Have we been united? Do you understand what's going to happen when we fall because a house that is against each other cannot stand,” she said.

Jackson said she’s praying for the police officers and their families.

“To all of the police officers, I am praying for you and your families. To all of the citizens, my black and brown sisters and brothers, I’m praying for you. I believe that you are an intelligent being just like the rest of us. Everybody, let's use our hearts, our love, and our intelligence to work together to show the rest of the world how humans are supposed to treat each other. America is great when we behave greatly,” she said.

Jackson said her son asked the police officer that were in the hospital with him to pray with them.

“When I began to pray for him, he told me to stop. He asked the police officers that was in the room with us if he was a man of faith. He responded yes, in short. He asked him to pray with us. The three of us prayed together,” she said.

Blake’s father, Jacob Blake, Sr., said the police shot his son seven times “like he didn't matter, but my son matters. He is a human being, and he matters.”