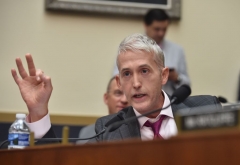 US Representative for South Carolina, Trey Gowdy, asks a question during a congressional House Judiciary Committee hearing on "Oversight of FBI and DOJ Actions Surrounding the 2016 Election," in Washington, DC, on June 28 2018. (Photo by NICHOLAS KAMM/AFP via Getty Images)

(CNSNews.com) - Former Rep. Trey Gowdy (R-S.C.) wondered Wednesday why it took for the video of an unarmed black man who was shot and killed by two men while jogging in Brunswick, Ga., to be released before authorities called for a grand jury investigation.

The incident took place in February and didn’t receive national attention until video of the incident went viral on the internet.

A special prosecutor assigned to the case recommended that a grand jury hear the case.

“We need a justice system that everyone regardless of color or ethnic background has confidence in. I guess my first question is, why did it take the video? If you have someone who is jogging, who is unarmed, who is shot and killed by officers who aren’t officers, they’re not even law enforcement officers, why did it take the video?” Gowdy told Fox News’ “The Daily Briefing with Dana Perino.”

“It makes me think back to the shooting in Charleston where the police officer said he was acting in self-defense and then the video came out,” he said, referring to the fatal shooting of Walter Scott in Charleston, S.C. Scott was unarmed when he was pulled over by Officer Michael Slager. Slager pled guilty to violating Scott’s civil rights and sentenced to 20 years behind bars.

“So I think what people of color want to know is, where is the justice before it's on video? Because most of the stuff is not on video,” Gowdy said.

When asked what the next step is if the case goes to grand jury, Gowdy said, “Well you can indict a ham sandwich. That’s just a fact. Grand juries do some investigating but if you watch the video, the two suspects are not going to talk.

“They’re not going to testify before the grand jury, and it's a pretty low evidentiary threshold, it's probable cause. It’s nowhere near enough to get a conviction, but that’s all it takes to get an arrest. You can indict anything you want to indict so I will be watching what this specially appointed prosecutor does,” he said.