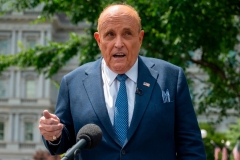 Rudy Giuliani, attorney for US President Donald Trump, speaks at the White House in Washington, DC, on July 1, 2020. (Photo by JIM WATSON/AFP via Getty Images)

(CNSNews.com) - The U.S. has lost some of its patriotism since the 9/11 terrorist attacks in 2001, and no one was taking a knee then or burning flags, former New York City Mayor Rudy Giuliani said Friday.

“We've become much more divisive. We’ve lost a certain percentage of patriotism. I don't remember anybody taking a knee in 2001, ever. I don't remember people burning flags. That would have ended 20 years earlier,” Giuliani said in an interview with Fox Business Channel’s “Mornings with Maria Bartiromo” when asked how things have changed since 9/11.

“I don't remember people saying hateful things about America, how horrible we are, how horrible our founders are. We’ve got a whole movement, hate America movement going on that we’ve come up against right now. We even have two different ceremonies because the other group is not reading the names. They're playing a recording, it’s a prerecorded -- to me that's disgraceful - prerecorded reading of the names? Come on,” he said.

“These people gave up a lot for America. I mean, some of them on purpose. Steven Siller ran in. he was at home sleeping. He ran in to save people. Now his children have grown up without a father, and you've got to remember that. We have to remember too, Maria, because it's not over,” the former mayor said.

Giuliani said that the terrorist threat to America is not over, and that’s one good reason not to defund the New York City police department, because they’re the first to respond to a terrorist attack.

“This isn't Pearl Harbor. It isn't Appomatox. Those are over, and we're friends now. These people still want to come here and kill us, and we're defunding the police department that protects the number one Islamic terrorist target in the world, New York City? That comes from our intelligence agency. I'm sure that hasn't changed, and we defund the police department. Do you realize the signal that sends to them?” he said.

“They feed on weakness, Maria. They feed on -- they were feeding on weakness and the response that had been had to bin laden in the past. We know that now. Can you imagine the weakness they see now with our police being humiliated and our -- they want to do away with our police department, I mean, social workers are going to protect us against terrorists?” Giuliani said.

“We have to use this day -- this isn't political. This is about the safety of the nation. We have to use this day to reinforce the notion that we're at risk. We've got lots of risks. Domestic crime is growing by record numbers, but we have a risk of terrorists coming here and killing us. They still hate us. They're still being trained to hate us,” the former mayor said.

“The Islamic Republic of Iran is giving them hundreds of millions of dollars a year. A few years ago it was our money they were giving them because Obama gave it to them and they're being trained to kill us and they're looking for the right opportunity. Remember, it took them -- they attacked us in '93 and in 2001. Took them eight years to do it again, right?” he added.

Giuliani said that people should remember that the police are the ones that run into buildings to save people, “not the people yelling and screaming about them.”