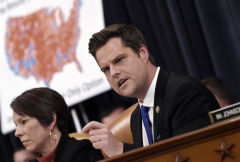 (CNSNews.com) - Rep. Matt Gaetz (R-Fla.) echoed talk show host Dave Rubin’s assertion that “this new woke leftist, Marxist thing” is “a mind virus,” adding that the only vaccine for the virus is “unapologetic patriotism” and the belief that every American should be treated equally.

In an segment on Fox News’ “Hannity” on Wednesday, Gaetz responded to the left’s boycott of Goya Foods and Ivanka Trump’s support for the company, a Los Angeles Times contributor’s suggestion to replace the National Anthem with the song “Lean on Me,” saying, “The radical left is trying to create a country too woke for Ivanka, Goya Foods, and even the National Anthem for goodness sakes, and I am not here for it.

“The reason why our National Anthem matters, our statues matter, our history matters, our businesses like Goya Foods matters [is] because they create a sense of national identity. We want that national identity to be strong so that people are patriotic and love our country, and fight for our country to be the very best version of itself, but the left is attacking all of this because they want us to love our people and our history and our Star-Spangled less because they want to replace our country with something else,” he said.

“I guess the ‘Los Angeles Times’ wrote that they should replace the banner with Lean on Me, Sean, but if that’s the case, it would most certainly violate the social distancing rules, because I don't know how you can lean on someone from six feet apart. So maybe there would be no song and no company, no art that we could ever celebrate again if we let these radical leftists control our country,” the congressman added.

“I'm going to guess, Sean, that none of the people you just mentioned have ever afforded you the same accommodation when the mob has come after you and tried to take your sponsors or anything else, but I think there's a reason -- a fundamental reason, which is that people on the right fundamentally understand that if you believe in individual rights, and you believe in the Constitution, you understand that we've got 300 million people in this country,” he said.

“They come from all walks of life, all different backgrounds. They are going to believe different things. Their purchasing habits are going to be different. They’re going to live in all sorts of different ways. This new woke leftist, Marxist thing, it is a mind virus,” Rubin said.

“A virus is very easy to catch and very hard to get rid of, and this set of ideas that says you’re morally right all the time, and everyone who opposes you is evil, and thus worth boycotting or destroying, or eliminating from society, it sounds good. It's attractive to young people, and we have to keep beating it with better ideas,” he added.

Gaetz seized on Rubin’s “mind virus” analogy, saying that the only cure is “patriotism” and equal treatment.

“Dave’s right, this is a mind virus, and the only vaccine is unapologetic patriotism and belief that in America everyone should be treated equally, and we should have the courage to be able to confront ideas that we don't like or make us uncomfortable with more speech,” the congressman said.

“You cite ‘The New York Times’ their opinion page editor had to resign because he believed that stories even two or three years ago would've been deemed acceptable now could get an editor or reporter fired. He accused ‘The New York Times’ of essentially being beholden to the Twitter mob specifically. He said that Twitter has no official masthead at the times, but it is the ultimate editor. I want to live in a world where we have the confidence to confront ideas with better ideas,” Gaetz added.