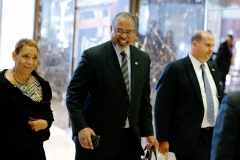 Former Ohio secretary of state Ken Blackwell (C) arrives at the Trump Tower for meetings with US President-elect Donald Trump, in New York on November 17, 2016. (Photo by EDUARDO MUNOZ ALVAREZ/AFP via Getty Images)

“Traditionally, the Electoral College results happens to be the point by which we have started to refer to the winner as the president-elect but technically, Joe Biden is not the president-elect, because seven states are sending competing slates of electors to the Congress via the archivist,” Blackwell told Fox Business’s “Mornings with Maria Bartiromo.”

“We already know that there will be one senator and one member of the House that will challenge these slates coming from the electoral college. That means that that has to be vetted out. That means that the clock didn't stop on Monday of this week. The clock is still running. A shorter runway, the time is running out, but there's still time on the clock to really push this through,” he said.

Blackwell, a Trump elector,” pointed out that “there were massive irregularities.”

“There were massive violations of the Constitution. The Constitution in Article 2 gives state legislatures the authority to set the schedules and the rules by which elections are conducted. Whether you're talking Wisconsin or Pennsylvania, there were transgressions against the rules,” the former secretary of state said.

“There were procedures made by the secretaries of state, for instance, in Pennsylvania, where it went against the rules and schedules established by the legislature. So they are within their right to challenge the counts in those states, because clearly there were illegal ballots that were counted.

“And so, one, the campaign is within its right to pursue this, and I think it's somewhat almost laughable that a party and the left, the Democrats' Party and the left, for four and-a-half years have questioned the legitimacy of this president, and now that he is staying within the four corners of the rule of law, challenging the count, it's ridiculous,” he said.

“He must do this, and let me just close by saying this. It's important that he does it because on January the 5th we cannot afford to have the same dog bite us again, and that's why we have to really put a spotlight on these transgressions, irregularities,” Blackwell said.

“It is if Donald Trump had long coat tails but no coat, and that reminds me of Alice in Alice in Wonderland, when she said things are getting curiouser and curiouser,” he added.