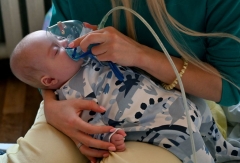 A woman holds an oxygen mask over the face of her baby suffering from the coronavirus disease (Covid-19) in a ward of a children's hospital in Kiev on November 16, 2021. (Photo by SERGEI SUPINSKY/AFP via Getty Images)

“We have to recognize this has not been a benign disease in young children. There's a perception that young children haven't been hit hard to date from coronavirus. That's just not true. We've recorded more than 600 pediatric deaths from COVID over the last two years,” he said.

“To put that in perspective, we have one death from flu in the pediatric population last year and so far, two this year. So, over a period of time when we've done a very good job protecting children generally from respiratory infections, we've recorded more than 600 deaths from COVID against three deaths from flu,” the former commissioner said.

“So, this is affecting children, and particularly young children. This new strain could have a predilection again for the upper airway, which could be a bigger challenge in young kids because of the way that it binds to the airway cells,” Gottlieb said.

“In terms of going back to school, I think the prerogative clearly is to try to get schools reopened. We shouldn't be doing preemptive school closures, in my opinion, but there will be situations where we have reactive school closures, when there are large outbreaks,” he said.

Gottlieb said that “cloth masks aren't going to provide a lot of protection.”

Gottlieb said that the focus should be on “the hospitalization rate and how many people are becoming severely ill.”

“There is a very clear decoupling between cases at this point in hospitalizations and ICU admissions. This does appear to be a milder strain of coronavirus, and we also have a lot of immunity in the population,” the former commissioner said.

He predicted that “places that have been hard hit early, like the mid-Atlantic, the northeast New England, Florida, parts of the Pacific Northwest, may be two weeks away from peaking, but the rest of the country probably faces a hard month ahead of us.”

Gottlieb said that there won’t be a national peak until February “because there's parts of the country that really haven't been hard hit by Omicron yet, and the virus will spread around the country.”

“There's a very clear, as I said, decoupling between cases and hospitalizations and does appear now based on a lot of experimental evidence that we've gotten just in the last two weeks, that this is a milder form of the coronavirus appears to be a more of an upper airway disease and a lower airway disease that's good for most Americans,” he said.

“The one group that- that may be a problem for his very young kids- very young children, toddlers who have trouble with upper airway infections, and you're in fact seeing more croup like infections and bronchiolitis in New York City among children. So, that could be a challenge for young kids, and we are seeing rising hospitalizations among that pediatric segment,” Gottlieb added.