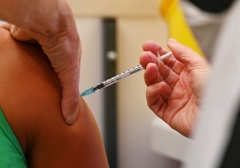 A member of the public receives a dose of the Pfizer BioNtech vaccine at a vaccination centre in Derby, central England on September 20, 2021. (Photo by PAUL ELLIS/AFP via Getty Images)

(CNSNews.com) - Former FDA Commissioner Dr. Scott Gottlieb said Sunday that the federal government was “well within its right to mandate vaccinations for federal workers, for health care workers” and even for Medicare recipients.

“And I think, you know, the federal government is well within its right to mandate vaccinations for federal workers, for health care workers. I think even mandating vaccination within the Medicare program could be something that's defensible, but when you impose the mandate down to the level of small businesses, now you're setting up the political fault lines,” he told CBS’s “Face the Nation.”

Gottlieb said that the mask debate is “inexplicable” to him.

“Like, I can't decouple it. I can't explain it. I can't defend it. People generally have an apprehension about taking a medical product, especially when they're healthy, especially for a preventative purpose,” he said.

“I understand just, sort of, people's general questions and concerns about a novel medical product, but a mask is such a simple intervention. It's not going to cause you any harm. It's just an act of, you know, community responsibility, an act of respect,” Gottlieb said.

“So are you going to get enough benefit from a public health standpoint or the price you pay in terms of hardening those lines. I think that was worth a very vigorous debate. I hope the White House had it,” Gottieb said.

He said that it’s a “misjudgment” for Republicans to argue that vaccine mandates are a violation of American civil liberties.

“If you go into a school setting and you're not vaccinated for measles and you introduce measles into that setting, you're affecting your community. So I don't think governors should tell schools and businesses you can't mandate a vaccine. If a business makes a decision that the only way that I can protect my employees or my customers is by having a fully vaccinated workforce, they should have the ability to make that decision,” he said.

“Certainly, looking at South Dakota, where this was just allowed to travel largely unfettered with public health interventions where you saw one of the highest death rates per capita, you have to look back and say that was a bad experience,” Gottlieb said.

“Once we learned how to treat this, once we're able to reduce the case fatality rate by half, by the summer time, and we got there, we got there pretty quickly, states that were still excessively engulfed by this and had a lot of death and disease, those were, in part, policy decisions. Those were, in part, the result of policy choices that those states made,” he said.