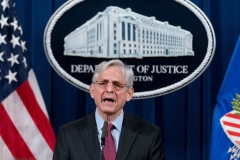 Attorney General Merrick Garland speaks about a jurys verdict in the case against former Minneapolis Police Officer Derek Chauvin in the death of George Floyd, at the Department of Justice on April 21, 2021 in Washington, DC. (Photo by ANDREW HARNIK/POOL/AFP via Getty Images)

(CNSNews.com) – Attorney General Merrick Garland announced Wednesday that the Justice Department has opened a civil investigation into whether the Minneapolis Police Department “engages in a pattern or practice of unconstitutional or unlawful policing.”

Garland’s announcement comes one day after former Minneapolis Police Officer Derek Chauvin was convicted of murder in the death of George Floyd.

“Like so many of you, I have closely watched the events in Minnesota. Although the state’s prosecution was successful, I know that nothing can fill the void that the loved ones of George Floyd have felt since his death. My heart goes out to them and to all those who have experienced similar loss,” the attorney general said.

“I know such wounds have deep roots and that too many communities experienced those wounds firsthand. Yesterday’s verdict in the state criminal trial does not address potentially systemic policing issues in Minneapolis,” Garland said.

“Today I’m announcing that the Justice Department has opened a civil investigation to determine whether the Minneapolis Police Department engages in a pattern or practice of unconstitutional or unlawful policing. This effort will be staffed by experienced attorneys and other personnel from the Justice Department’s Civil Rights Division and the U.S. attorney’s office for the district of Minnesota,” he said.

Garland said that the investigation is “separate and independent of the federal criminal investigation” into Floyd’s death previously announced by the DOJ.

Garland said that the new investigation “will assess whether the Minneapolis Police Department engages in a pattern or practice of using excessive force, including during protests.”

“The investigation will also assess whether the MPD engages in discriminatory conduct and whether its treatment of those with behavioral health disabilities is unlawful. It will include a comprehensive review of the Minneapolis Police Department’s policies, training, supervision, and use of force investigations,” he said.

“It will assess the effectiveness of the MPD’s current systems of accountability and whether other mechanisms are needed to ensure constitutional and lawful policing. Broad participation in this investigation from the community and from law enforcement will be vital to its success,” the attorney general said.

“The Justice Department has already begun to reach out to community groups and members of the public to learn about their experiences with the MPD. We also seek to hear from the department’s officers about the training and support they received, because their perspective is essential. All these voices will help provide investigators the information they need to conduct a comprehensive assessment,” he said.

“All these voices will be critical to the reform efforts that will follow if the investigation determines the existence of constitutional or statutory violations. If the Justice Department concludes that there’s reasonable cause to believe there is a pattern or practice of unconstitutional or unlawful policing, we will issue a public report of our conclusions,” Garland said.

The attorney general said that it also has the authority to bring a civil lawsuit against the department,
asking a federal court for injunctive relief that orders the department to change its policies and practices to avoid further violations.

“Usually when the Justice Department finds unlawful practices or patterns of practices, the local police department enters into a settlement agreement or a consent decree to ensure that prompt and effective action is taken to align policing practices with the law,” Garland said.

“Most of our nation’s law enforcement officers do their difficult jobs honorably and lawfully. I strongly believe that good officers do not want to work in systems that allow bad practices. Good officers welcome accountability, because accountability is an essential part of building trust with the community, and public safety requires public trust,” he said.

The attorney general said that the DOJ “will be unwavering in its pursuit of equal justice under law” and that “building trust between community and law enforcement will take time and effort by all of us.”