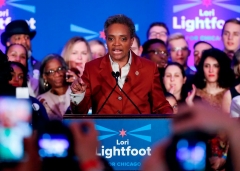 (CNSNews.com) – Chicago Mayor Lori Lightfoot told CNN’s “State of the Union with Jake Tapper” on Sunday that other cities with “virtually no gun control” are to blame for the city’s gun problem, because 60 percent of the illegal guns come from states outside of Illinois.

“The fact of the matter is, our gun problem is related to the fact that we have too many illegal guns on our street, 60 percent of which, 60 percent of which come from states outside of Illinois. We are being inundated with guns from states that have virtually no gun control, no background checks, no ban on assault weapons. That is hurting cities like Chicago,” she said.

“That is the thing that, if the president really wanted to help, that and the other things I identified in my letter, he could do today, tomorrow, but he's not really interested in helping in that way,” the mayor said.

As CNSNews.com previously reported, Trump announced that he was sending federal help to the city of Chicago to quell violent crime that has increased recently.

“For decades now, in major cities across the country, FBI, DEA, ATF, those agents have been in our districts, and do work, and work in concert with local law enforcement to help support a number of efforts, not the least of which is violence in our cities, and so the opportunity presented itself, under the management of the U.S. attorney here,” she said.

“And I stress that because that's unlike what we saw in Portland, where the Trump administration parachuted in these additional federal agents, without consulting anybody locally and ignoring the local U.S. attorney, very different circumstance here in Chicago. I have drawn a very hard line. We will not allow federal troops in our city,” Lightfoot said.

“We will not tolerate unnamed agents taking people off the street, violating their rights, and holding them in custody. That's not happening here in Chicago. So, I have drawn a very, very bright line. I have made that very clear to every federal authority that I have spoken with, and they understand that, if they cross that line, we will not hesitate to use every tool at our disposal to stop troops and unwanted agents in our city, but, obviously, we have challenges regarding violence,” she said.

When asked whether she would support “an increased federal presence in Chicago, as long as they coordinated with local officials, local law enforcement and the U.S. attorney,” Lightfoot said, “Well, I have said it before, and I will say it again, no troops, no agents that are coming in outside of our knowledge, notification, and control that are violating people's constitutional rights. That's the framework.

“We can't just allow anyone to come into Chicago, play police in our streets, in our neighborhoods, when they don't know the first thing about our city. That's a recipe for disaster. And that's what you're seeing playing out in Portland on a nightly basis. We don't need that here. That is not a value add, and it doesn't help enhance our public safety,” she said.
Tapper quoted the president of the Chicago Fraternal Order of Police, who disagrees with Lightfoot, as saying, “Mayor Lightfoot has proved to be a complete failure, who is either unwilling or unable to maintain law and order here. These politicians are failing the good men and women of this city and the police department."

“There's no polite response to that,” Lightfoot said, “so I will just say this. We're in the middle of contract negotiations with the FOP. He knows that we're going to have a reckoning with them that imposes accountability measures that they adamantly resist. So, he's pandering to the crowd. He is completely out of touch with reality. He wants to hold onto a status quo that has failed everyone, including his members. We're not having that. So, I expect to hear more nonsensical things from him.”