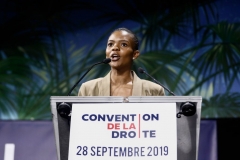 US activist Candace Owens delivers a speech during the "Convention de la Droite" in Paris on September 28, 2019. (Photo by SAMEER AL-DOUMY/AFP via Getty Images)

“Here is the thing. The left wants to keep black Americans poor and uneducated. This is why they're wiping the school system of hard academics and replacing them with this soft emotional conditioning, like Black Lives Matter and white privilege. I don't want to talk about white privilege. I don’t want to talk about Black Lives Matter Incorporated, which is run by white men,” she said.

She said people like rappers 50 Cent, Kanye West, Ice Cube and L’il Wayne are “pioneers,” and she said many more black entertainers, sports figures and celebrities contacted her privately expressing their support, but they’re afraid to go public before the election for fear of a backlash.

“I can tell you this. I wish, Maria, that I could speak out about all of the names of artists, A-list people, black Americans, I'm talking about basketball players, hip-hop artists, singers that have come to me in private, but they will not be speaking out ahead of the election,” Owens said.

“So it is much bigger than you could possibly imagine behind closed doors, and there is something happening, and I've been calling it for the last three years. I said there was going to be a blexit. I banked on it so hard. I started a 501(c)(3) not for profit to speak to black Americans about conservative principles,” she said.

“I don’t believe these polls for one second. A couple weeks ago they were saying that black America was at 8%, saying it was unchanged since 2016. I’ve never laughed harder. Now they're saying 14%. Oh what a difference. I think we're at 20%, and I think you’re going to see people going to the polls,” Owens said.

“They’re not going to pick up the phone and say, yes, I’m voting for Trump. They don't want to caricatured. They don’t want to be laughed at and called a coon and Uncle Tom, which I’ve been called for the last three years, but when they get in the booth, they're going to do the right thing, and they're going to vote for a president that believes that black Americans are just like all Americans, and that is Donald J. Trump who believes that philosophy,” she said.

That is exactly right. We want school of choice, Maria. Why should it be because someone comes from a disadvantaged neighborhood they have to go to bad schools? Why can't parents make the decision to take their children regardless of their skin color or their economic background to better schools, to more competitive schools to make sure they have a good academic future?

Instead what the left has done is they’ve built this beautiful welfare system. They make sure they impoverish you, then they send you to these poorly run school systems that are not teaching your kid anything. Even when we’re talking about in California, they're saying they're not going to let you flunk black kids or give black kids D’s.

That means they want black kids to perform badly, and they just want to pretend and give them passing grades. They love an ignorant class. They want us more and more ignorant, more and more emotional. I’ve called times up on it. They laughed at me when I came on the scene and I said Blexit. I will never forget the way that I was caricatured in the media. They are not laughing anymore. They are fearful.

My book has been on the New York Times best seller for the last seven weeks. They've been trying to make it seem like it’s not happening. No, it is definitely happening. I've been in the neighborhoods. I've hosted those Blexit events.

I have black Americans writing to me, saying thank you so much, and here’s what they say, Maria - thank you so much for giving me my life back. That means so much to me, and I’ll tell you why, because that's what I felt like when I started embracing conservative principles.

We don't need more government handouts. What we need is do things on our own. We are capable of doing things on our own, but we have to be awake to the lies of a Democrat Party. We do not need more government assistance. We need our families put back together. We need a stronger education system, and we need to be looked at the same as ever single person in the country. We are Americans first and foremost.

When asked what are the policies that have resonated with people of color, Owens said, “Entrepreneurship is the name of the game, making sure that we don't have all of these government regulations. If I have an idea and I say I want to start a business and then you find out that you've got to get -- there's all of these -- this thick layer of government regulations so you can't do it, that de-incentivizes entrepreneurship.

“Entrepreneurship is what makes America great, being able to have an idea to go out there, to maybe not have a college degree and have to be brain washed in these Marxist totalitarian camps at universities and say, you know what? I want to go out and take a chance on myself. That's what Donald Trump believes in. That’s why he's been he erasing regulation,” she said.

“This isn't something that just helps black Americans. It helps all Americans. I'll tell you this, you want to put Biden back in office? He's the person along with Barack Obama who gave black America more handouts. Donald J. Trump is giving us more hand ups. We don't want more food stamps. We want more opportunities,” Owens concluded.