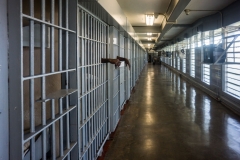 A prisoner's hands inside a punishment cell wing at Angola prison. The Louisiana State Penitentiary, also known as Angola, and nicknamed the "Alcatraz of the South" and "The Farm" is a maximum-security prison farm in Louisiana operated by the Louisiana Department of Public Safety & Corrections. (Photo by Giles Clarke/Getty Images)

(CNSNews.com) – Orange County, Calif., Sheriff Don Barnes said Tuesday that he has refused a judge’s order to release half the county’s inmates – 1,800 serious offenders – because it doesn’t take into account the threat to the public.

“Well, my reaction is it's really takes not into account the threat to the public. The judge's order said that I had deliberate indifference against those who are medically vulnerable within my jail. The government code in California allows me under a declared emergency to release anybody from my jail who I deem might be necessary,” he told Fox News’s “Fox and Friends.”

“We've released 1,400 inmates to-date since March, who are low-level offenders. The only inmates remaining now are serious offenders, and to order the release of 1,800 inmates - 700 of which would be medically vulnerable - I think is absurd,” Barnes said.

“The medically vulnerable 90 of them are in custody for murder or attempted murder, 94 for child molestation. It's an incredible order he placed on me and I have no intention of doing that of releasing these individuals back into the community. I think they present a serious threat,” he said.

Barnes said he plans to appeal the judge’s decision, and he’s meeting with the board of supervisors on Tuesday “about filing that appeal with the state appellate court to overturn, at least stay the order.”

Host Ainsley Earhardt asked whether the judge took into account the innocent people in the community that the sheriff is protecting that have children and don’t want sex offenders out in the public.

“I think the judge looked at this as if the inmates were the innocent people being subjected to the risk of COVID. Everybody in the community is at the risk of COVID right now,” Barnes said.

"We have a surge happening throughout the nation, and it totally discarded that and consider these people being vulnerable and not considering the risk to the public that they present when being released back into the community, I think is not only absurd, I think it's places the community at significant risk of being victims of crime, Many of them very violent crimes,” he said.

Earhardt noted that Judge Peter Wilson said the uncontested facts include that conditions don’t allow proper social distancing, there’s no mandatory testing of staff or asymptomatic detainees after intake, and the sheriff violated the Constitution.

“I think he got a lot of his facts incorrect,” Barnes said. “We have been testing inmates. We have been so far ahead of the curve when it came to best practice within our jails. We mitigated our COVID crisis down from 220 in March down to 0 as of last Monday. These inmates still have access to programs and legal services and other things. Many of them went to court.

“We know the first four inmates that showed symptoms had recently been to court, and more than likely those individuals there might have given it to them. They could have come into the jail in a litany of other ways because they still participate in these programs that have to go out in the community, guarded of course, but within the community there as service providers,” he said.

“We'll get that number back down. We've proven it before but the difference I have in my jail that's not happened in the community is we're testing everybody of the vast majority of these inmates are asymptomatic positive. They have no symptoms at all. We found out because we just tested them,” Barnes added.