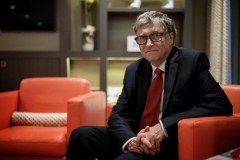 Microsoft founder, Co-Chairman of the Bill & Melinda Gates Foundation, Bill Gates, poses for a picture on October 9, 2019, in Lyon, central eastern France, during the funding conference of Global Fund to Fight AIDS, Tuberculosis and Malaria. (Photo by JEFF PACHOUD/AFP via Getty Images)

“Well, I'm just one citizen on this issue. I think he said a lot of things about the illegitimacy of the election that are corrosive, but the idea that that's -- you end up with a lifetime ban, you know, that -- it seems like we should discuss, we don't want to partition and have, you know, a social network for one party and another social network,” Gates told “Fox News Sunday.”

“We want to have a common base where we are exchanging ideas and thoughts. So I think these are early days on how we keep the good parts of social media and yet not spread violence or, you know, vaccine denial, holocaust denial,” he said.

“There's got to be some way that between the government and the well-meaning actors, we draw the line so we keep the open debate without the corrosive parts,” Gates added.

On Jan. 8, Twitter announced the permanent ban of the former president, saying in a statement:

After close review of recent Tweets from the @realDonaldTrump account and the context around them — specifically how they are being received and interpreted on and off Twitter — we have permanently suspended the account due to the risk of further incitement of violence.

In the context of horrific events this week, we made it clear on Wednesday that additional violations of the Twitter Rules would potentially result in this very course of action. Our public interest framework exists to enable the public to hear from elected officials and world leaders directly. It is built on a principle that the people have a right to hold power to account in the open.

However, we made it clear going back years that these accounts are not above our rules entirely and cannot use Twitter to incite violence, among other things. We will continue to be transparent around our policies and their enforcement.