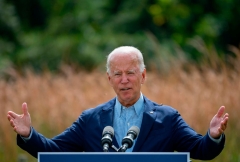 Democratic presidential candidate Joe Biden speaks outside the Delaware Museum of Natural History in Wilmington, Delaware, on September 14, 2020. - Biden remarked on the ongoing wildfires and the urgent need to address the climate crisis. (Photo by JIM WATSON/AFP via Getty Images)

(CNSNews.com) – Democratic presidential nominee former Vice President Joe Biden called President Donald Trump “a climate arsonist” who doesn’t respect science and that if he is re-elected, more of America will be “ablaze.”

After Biden’s press conference, Trump met with California Gov. Gavin Newsom and other state officials about the wildfires that have raged throughout the state. Wildfires have also ravaged Oregon and Washington state.

“As he flies to California today, we know he has no interest in meeting this moment. We know he won't listen to the experts or treat this disaster with the urgency it demands as any president should do during a national emergency. He’s already said he wanted to withhold aid to California, to punish the people of California, because they didn't vote for him. This is another crisis-- another crisis he won't take responsibility for,” Biden said.

“The West is literally on fire, and he blames the people whose homes and communities are burning. He says, ‘You've gotta clean your floors. You gotta clean your forest.’ This is the same president who threw paper towels on the people of Puerto Rico instead of truly helping them recover and rebuild,” he said.

Trump has “disdain” for the military and veterans, Biden said. “Just last year, the Defense Department reported that climate change is a direct threat to more than two-thirds of the military's operationally critical installations. The military warned him. This could well be -- this well could be a conservative estimate,” the former vice president said.

“Donald Trump's climate denial may not have caused these fires and record floods, and record hurricanes, but if he gets a second term, these hellish events will become more common, more devastating, and more deadly. Meanwhile, Donald Trump warns that negation is threatening our suburbs. It's ridiculous,” Biden said.

“You know what is actually threatening our suburbs? Wildfires are burning the suburbs and the west. Floods are wiping out suburban neighborhoods in the Midwest. Hurricanes are imperiling suburban life along our coast. If we have four more years of Trump's climate denial, how many suburbs will be burned with wildfires? How many suburban neighborhoods will have been flooded out? How many suburbs will have been blown away in super storms?” he asked.

The Democratic presidential nominee accused Trump of failing “the most basic duty” to the nation.

He said that when Trump thinks about climate change, the president thinks “hoax.”

“When I think about it, I think ‘jobs’ - good paying union jobs that put Americans to work, building a stronger, more climate-resilient nation, a nation modernized. We have water modernized and transportation systems, an energy infrastructure to withstand the impacts of extreme weather and changing in climate,” Biden said.

“When Donald Trump thinks about renewable energy, he sees windmills somehow as causing cancer. I see American manufacturing, American workers racing to lead the global market. I see farmers making agriculture the first in the world to achieve net zero missions, and in the process, gaining new sources of income,” the former vice president said.

“When Donald Trump thinks about L.E.D. Light bulbs, he says he doesn't like it because the lights are no good. They always make them look orange. I see small businesses and master electricians designing and installing award-winning energy conservation measures, rebuilding buildings across the country,” Biden added.