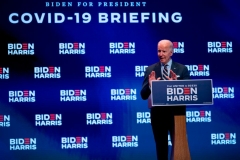 Democratic Presidential Candidate Joe Biden speaks during a press conference after meeting with public health experts on a Covid-19 vaccine in Wilmington, Delaware on September 16, 2020. (Photo by JIM WATSON/AFP via Getty Images)

(CNSNews.com) – Democratic presidential nominee former Vice President Joe Biden said Wednesday that he would have to get consensus from a board of scientists before he would take a coronavirus vaccine, because he doesn’t trust President Donald Trump.

Speaking at a press conference in Wilmington, Del., Biden was asked, “You just said that when it comes to a vaccine you don't trust Donald Trump. Is there a risk that that message, that questioning the president on a vaccine, could prevent people from trusting the science, from trusting a vaccine when there finally is one?”

“No, because they know he doesn't have any respect for scientists. He basically said it. You saw what he said when he was out in California about wildfires, and scientists don't know, and it's going to go away like a miracle. It's necessary so people can trust the vaccine,” Biden said.

“That’s why I said you have to have this board of scientists that are going to say, ‘This is why we think this is a good vaccine, why it's approved,’ and it has to be total transparency. So scientists outside the government know exactly what is being approved, the context of which it’s being approved, and why it's being approved. It's the only thing that takes care of that,” he said.

The reporter pointed out that for a vaccine to be effective, “you do you need a certain amount of the population to be willing to take it.”

“That's right,” Biden said. He disputed the notion that he’s asking the American people to trust him and not Trump.

“No, I'm not. I'm saying trust the scientists. Trust the scientists. It's one thing for Donald Trump to say the vaccine is safe. Okay. Then give it to the board of scientists, have total transparency so independent operators and scientists and companies go out and take a look at it,” the former vice president said.

“What did you base that decision on? What did you do? Did you pressure the head of the FDA? Did you pressure whoever? I'm not saying he would or will, but that’s what has to happen. You know yourself, you all know the polls better than I do. The American people right now don't trust what the president says about things relating to science,” he said.

“And if the scientists say a vaccine under the president's watch is safe and effective, you will take it?” the reporter asked.

“Absolutely, do it. Yes. If those three questions I laid out, if they can be answered, yes. Absolutely,” Biden responded.