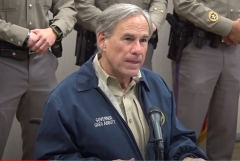 “Election Integrity is now law in the state of Texas,” Abbott said after signing the law.

The changes to the Texas election process includes banning drive-thru voting, 24-hour early voting, soliciting or distributing mail-in ballots or applications to those who didn’t request them.

Before the bill was even signed, two federal lawsuits--in Austin and San Antonio--were filed against the Election Integrity law, according to The Texas Tribune.

The plaintiffs in both lawsuits assert the law “takes particular aim at voters with disabilities, voters with limited English proficiency — who, in Texas, are also overwhelmingly voters of color — and the organizations that represent, assist, and support these voters,” according to the complaint of the Austin lawsuit.

These suits follow the same argument Texas Democrats made when they staged two separate walkouts this past summer during the regular session, in hopes of stopping the bill from passing through the state’s legislature.

After the first walkout in May, Abbott called a special session to bring lawmakers back to Austin, wrote CBS News.

However, several days into the session, 50 Texas House members left the state for the second time, and went to Washington, D.C. in attempts to “kill the bill,” reported CBS news.

Thirty-eight days later, four senators returned to the Texas House, allowing the vote to finally proceed. The bill passed 80-41 in the House, and 18-13 in the Senate, giving Abbott the opportunity to sign it into law.