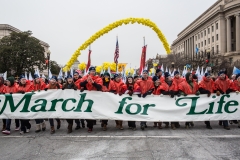 (CNS News) -- The March for Life announced “Equality Begins in the Womb” as its theme for the 2022 rally in Washington, D.C. during a Wednesday briefing at the Heritage Foundation, a conservative think tank.

The March for Life is a rally and march that protests abortion in the United States. The march occurs annually on or near the anniversary of the Supreme Court’s Jan. 22, 1973 Roe v. Wade decision. (The 2022 march is on Jan. 21.)

“We want to expand this debate, this rigorous debate, about equality to include unborn children, who are often overlooked because they cannot speak for themselves,” said Jeanne Mancini, president of the March for Life Education and Defense Fund.

Video of the briefing can be seen here.

The briefing featured a panel of speakers who addressed the importance of the March for Life and the relevance of its theme scientifically, legally, and culturally. This year’s march will occur within weeks of the Supreme Court’s hearing of the case Dobbs v. Jackson Women’s Health Organization on Dec. 1, 2021.

The Dobbs case will determine the constitutionality of a 2018 Mississippi law that bans abortion after 15 weeks of gestation. If the Supreme Court allows the law to stand, it will upend Roe V. Wade, which sets fetal viability at roughly 24 weeks into pregnancy (six months), a time beyond which states heavily regulate abortion.

“It’s going to be one of the most significant years, I think, for the march yet,” Carrie Severino, chief counsel and founder of the Judicial Crisis Network, said at the briefing.

Severino addressed the inscription on the Supreme Court building that reads, “Equal justice under law,” and how the Dobbs case provides an opportunity for the justices to fulfill that promise to the unborn.

“Hopefully, we’ll have some good news in June that will move us in the right direction and continue to promote that equality under law that the Supreme Court is supposed to stand for,” Severino said.

Because of vast improvements in ultrasound technology since Roe v. Wade was decided in 1973, members of the scientific community now hold more physical evidence as to why babies should not be aborted after 15 weeks.

“Justice Blackman wrote in his Roe decision that, at that point in the development of human knowledge, there was simply no consensus as to the question of when life begins,” Dr. Grazie Christie said. “Perfectly apparent now to the justices sitting on the court, to all of us, to the wider public, is the liveliness and humanity of babies at 15 weeks of gestation.”

Christie, a radiologist and policy advisor with the Catholic Association, explained how ultrasounds provide scientific evidence that a fetus has a heartbeat, working organs, and human features at 15 weeks of gestation.

“It is high time to re-examine the premise of Roe, a case based on a claim about science,” Christie said.

Ryan Bomberger, CCO of The Radiance Foundation, addressed how the Supreme Court has correctly overturned precedent when it is found to be wrong, and they need to do the same with Roe v. Wade if they are going to strive for the equality that is granted to all people under the Constitution.

Bomberger acknowledged that changing the law and the hearts and minds of the American people regarding abortion has been the mission of his life and the March for Life, which is why he’s passionate about fighting for the idea that “Equality begins in the Womb.”