Trans-Reversal: ‘It’s a Disgrace to Scientific Medicine … to Remove the Breasts of an Autistic 20-Year-Old’ 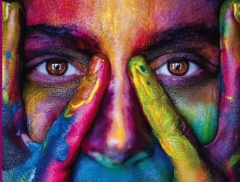 (CNS News) -- During an online symposium for college students about gender identity, two de-transitioned women – females who had transitioned to males and then back -- shared their stories and said their doctors and families failed them in not recognizing that conditions like autism and ADHD were the actual cause of their gender dysphoria.

“I look back on it and think ‘how could you possibly have missed this?’” said one woman, Michelle Alleva.  “This is something that would have been -- that's so crucial to the decision that I was making to transition, and it was never offered to me.”

Laura Becker said, “It's a disgrace to scientific medicine, nuanced psychological analysis, and human compassion to remove the breasts of an autistic 20-year-old girl because she hated herself and didn't know what she was doing in the midst of a traumatic crisis.”

Both Becker and Alleva had undergone medical treatment to transition to “males,” but now have gone back to females. The symposium was sponsored by Genspect, an organization that advocates for a better model of transgender care than the current “affirmative” approach.

Becker underwent a double mastectomy, despite telling her doctor on the day of surgery that she felt suicidal; she said she attributed those feelings at the time to other causes. Part of her de-transition came in part to receiving a mental health diagnosis of autism.

“The transition and the trans-identity were just another manifestation of trauma, and that the entire identity had been a maladaptive coping mechanism,”  Becker explained. “The worst part of all is the still untreated root causes of the distress that are now compounded by the trauma of going through the gender transition and de-transition.” 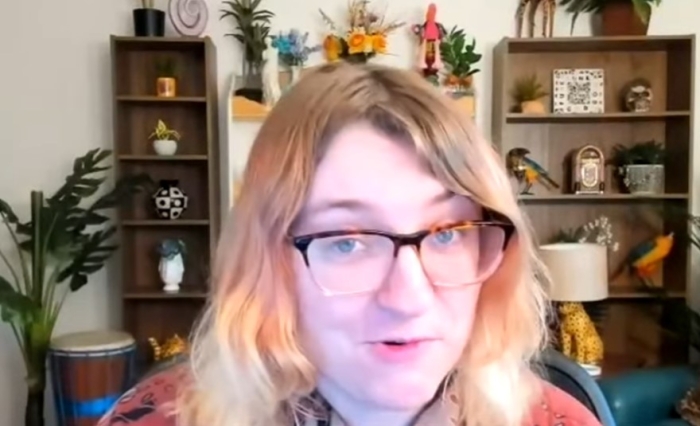 Becker said in reflection on her experience, “It’s a disgrace to scientific medicine, nuanced psychological analysis, and human compassion to remove the breasts of an autistic 20-year-old girl because she hated herself and didn't know what she was doing in the midst of a traumatic crisis.”

“Mentally sick young adults are not competent to give consent, and there's permanent damage being done,” Becker said, “There are certain things that I have to accept, like if I ever have children I won't be able to breastfeed them.”

Michelle Alleva described a similar experience. Alleva de-transitioned after 10 years of identifying as transgender and undergoing both a double mastectomy and a hysterectomy. She was 30 years old before learning she had autism spectrum disorder, ADHD, and post-traumatic stress disorder, which eventually led to her de-transition.

Alleva claims that the popular “affirmation approach” left little room to consider if she had underlying disorders, and left them untreated as a result.

“The thing that made me stop—why I decided to de-transition—was that now I had the diagnosis,” she said. “It took me many years to really look into autism and ADHD and think about them and how each of these things might have affected me.” 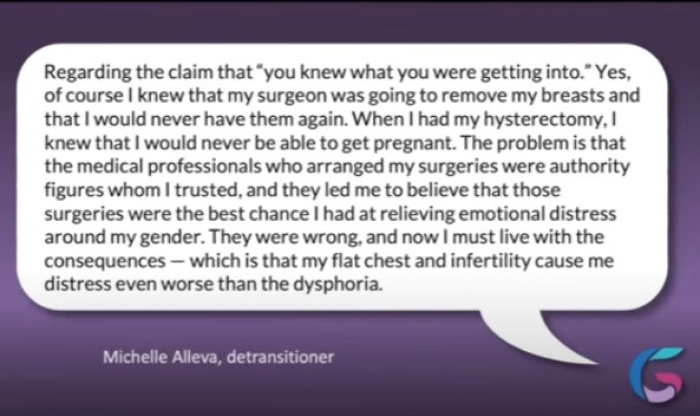 “And I look back on it and think ‘how could you possibly have missed this?’” she said. This is something that would have been that's so crucial to the decision that I was making to transition, and it was never offered to me.”

“The way that people talk about trans online is: if you think you're trans, you are,” Alleva said. “There's very little of people telling you that you're not trans or that you should think about not transitioning. It's very, very encouraged to transition.”

The Genspect symposium also emphasized that these women’s stories are more common than a popular study suggests.

Genspect moderator Stella O’Malley said, “The low stats that are quoted there, they're flawed. For example, a very often quoted one is 1% have de-transitioned. We've all heard that stat. But anybody who really knows the research knows that it is a very flawed stat as 36% of the people left the treatment at the center. So, it's all this lost follow-up and then 75% aren't contacting [the center after treatment].” 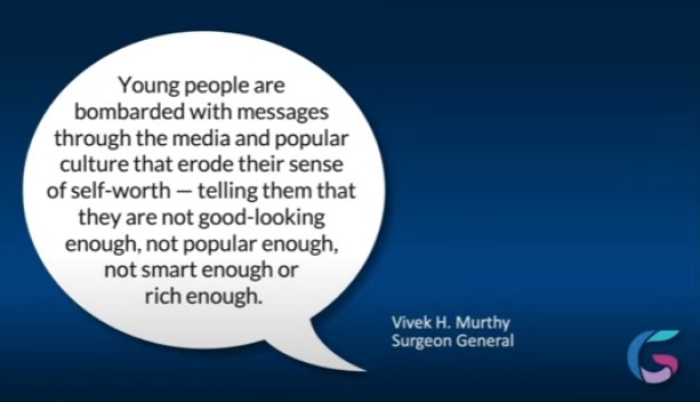 “We don't know the numbers, the only one that we know of recent times would be at the study from Lisa Littman, which was released last November, which is 76 percent [of de-transitioners] don't come back to the clinics that was [a study of] only 100 transitioners,” said O’Malley.

“Many more studies have to be done on this subject,” she added. “It's a new cohort, new numbers, and we have to give them the respect and the kind of humility to know that we don't know.”