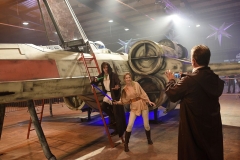 Star Wars fans dressed as the characters Obi-Wan Kenobi and Princess Leia pose for a photograph in front of a full-size model of an X-wing fighter in the unofficial Star Wars convention, 'For the Love of the Force,' in Manchester, northern England on December 4, 2015. (Photo by OLI SCARFF/AFP via Getty Images)

"Padawan," published on August 26th, is written by Kiersten White and aims to tell the story of Obi-Wan Kenobi as a teenager training to be a Jedi. The young adult novel is recommended by Amazon for kids between the ages of 12 and 18.

Many on social media were alerted to a specific passage in the book that suggests that the young Jedi is bisexual, or attracted to both men and women.

Following a conversation with a fellow teen about romantic relationships, Kenobi is described as questioning his sexuality.

“Would he ever get to a point where kissing someone felt like anything less than a betrayal of himself and the Jedi? And if he did get to that point, who would he want to kiss? The Lenahrans were confident and charismatic, which was attractive. But he couldn't imagine just... kissing any of them. Maybe he didn't want to be with any of them but rather to be more like each of them. Or maybe he wanted to kiss all of them,” the passage says.

A Star Wars Twitter fan page called Star Wars Queers Watch tweeted that the book contained even more “queer” characters, “Among the queer kids Obi meets: - their leader, Audj - her nonbinary shapeshifting partner, Zae-Brii - Audj' brother Casul, who's down to experiment with Obi - and Mem, a girl who's not down for romance or attraction at all.”

Previously in Star Wars iterations, Obi-Wan Kenobi had a female love interest named Satine Kryze of Mandalore. The Padawan author said that she did not include any love plots for Kenobi in the book because of that relationship.

“Also, before anyone else asks, Satine isn’t in this novel. Actually, she’s the reason why there are no romantic subplots in Padawan. Obi-Wan commits absolutely in everything he does — including first love. I couldn’t dilute that!”