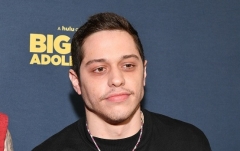 SNL, an entertainment show with a live-studio audience, is able to function normally due to a loophole in Governor Andrew Cuomo’s orders.

Davidson appeared on the “Weekend Update” sketch where cast members joke about current events. Host Colin Che asked him if he was against the Staten Island protests that occurred last week.

Staten-Island native Davidson responded, “I mean kind of. But I’m also just happy I’m no longer the first thing people think of when they say ‘what’s the worst thing about Staten Island.’”

Protests supporting a local bar that refused to shut down under COVID lockdown measures took to the streets of Staten Island last week following the arrest of Danny Presti, owner of Mac's Public House.

“The bar, shockingly, is in a neighborhood with the second-highest COVID infections in all of New York, so the rule is that they’re only supposed to let people eat or drink outside, and the owner said no one wants to do that because they’ll go out of business.” Davidson explained.

“They're making us look like babies!” Davidson said. “You know, it’s bad when people in Boston are like, ‘Ah, drink at home you queers!’”

Saturday Night Live, Davidson’s employer, is able to operate under lockdown measures in part because of a loophole in the rules for live studio audiences.

The New York Times reported that SNL was cleared under reopening guidelines because they “casted” their studio audience and paid them for attending.

According to the New York governor’s order, Media Production “must prohibit live audiences unless they consist only of paid employees, cast, and crew.”

“The ignorance level is so high now that you have mega-millionaires in the national spotlight like the folks on Saturday Night Live … making fun of their friends and local business owners who are broke, and crushed and bankrupt,” community activist John Tabacco told Fox News.

Attorney for the bar owners Lou Gelormino said, “Maybe Saturday Night Live should be mocking the people that looted and rioted our great city of Manhattan and the rest of the great cities of this country.”