Nikki Haley Alludes to Presidential Run in 2024 , Says Will ‘Have More to Say Soon’ 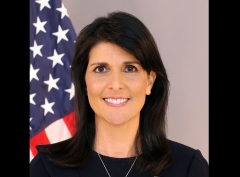 (CNS News) –Former South Carolina Governor Nikki Haley (R) hinted that she may run for president in 2024, during her Nov. 20 speech at the Republican Jewish Coalition.

During her speech, Haley said that if Joe Biden succeeds in getting back in the Iran deal, she promises “the next president will shred it on her first day in office.”   The “her” apparently refers to Haley.

Haley later mentioned that there was considerable curiosity from the public eye on whether she would run for president. In response to this questioning and now that the midterm elections are over, Haley said she would “look at it in a serious way” and that she’ll “have more to say soon.”

“If my family and I decide to continue our life of service – we will put 1000% into it and we’ll finish it,” she said. “For now, I’ll say this: I’ve won tough primaries and tough general elections. I’ve been the underdog every single time. When people underestimate me, it’s always fun.”

She continued, “But I’ve never lost an election and I’m not going to start now. I’m ready for the road ahead.”

It is up to Republicans and Americans, said Haley, to renew the hope of the country.

“And together – I know we will come through for them (our children and grandchildren) in a way that makes everyone proud,” she added.