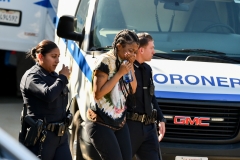 (CNS News) -- A health advisory released by the Centers for Disease Control and Prevention (CDC) in mid-December revealed that the largest increase in drug overdose deaths in the United States occurred from March to May 2020, which coincided “with the implementation of widespread mitigation measures for the COVID-19 pandemic,” said the health agency.

In its advisory, “Increase in Fatal Drug Overdoses Across the United States Driven by Synthetic Opioids Before and During the COVID-19 Pandemic,” the CDC said it was alerting public health departments, health care professionals, first responders, and other medical experts about “a concerning acceleration of the increase in drug overdose deaths, with the largest increase recorded from March 2020 to May 2020, coinciding with the implementation of widespread mitigation measures for the COVID-19 pandemic.”

The CDC reported that for the 12 months ending in May 2020, there had been 81,230 drug overdose deaths in the United States.

“This represents a worsening of the drug overdose epidemic in the United States and is the largest number of drug overdoses for a 12-month period ever recorded,” said the CDC.

“The recent increase in drug overdose mortality began in 2019 and continues into 2020, prior to the declaration of the COVID-19 National Emergency in the United States in March,” said the health agency. “The increases in drug overdose deaths appear to have accelerated during the COVID-19 pandemic.”

“These one-month increases of 2,146 deaths and 3,388 deaths, respectively for the 12-month periods, are the largest monthly increases documented since provisional 12-month estimates began to be calculated in January 2015," said the agency.

In other words, the largest increases in overdose deaths occurred in the 12-month periods ending in February, March, April, and May 2020.

The U.S. government started to implement health safety precautions because of the COVID pandemic in February 2020. The Trump administration declared a public health emergency because of COVID on Jan. 31, 2020 and a national emergency on March 13, 2020.