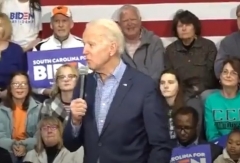 At a campaign rally in South Carolina earlier this year, former Vice President Joe Biden – now the presumptive Democrat presidential candidate – told a voter that his taxes will be raised, and not cut, under a Biden Administration. The reason: because that voter had benefited from the Trump Administration’s $1.9 trillion tax cut, Biden said.

At the February 28 event, Biden asked his audience if any of them “did really well” with the tax cut – and when one voter raised his hand, Biden promised to put an end to it:

“By the way, how many of you did really well with that $1.9 trillion dollar tax cut that increased...really good shape right? [Voter raises hand] Well, you did? Well, that's good, I'm glad to see you're doing well already.”

“But, guess what? If you elect me, you're going to have your taxes raised, not cut - if you benefited from that.”

Biden’s campaign website appears to corroborate his claim. As president, Biden plans to “make bold, new investments” and pay for them by “reversing some of Trump’s tax cuts,” the website promises:

“To see this agenda through, Joe Biden will make new, bold investments and speed up the timetable for many of the 10-year investments he has already announced.

“He will pay for the ongoing costs of the plan by reversing some of Trump’s tax cuts for corporations and imposing common-sense tax reforms that finally make sure the wealthiest Americans pay their fair share.”

If Biden makes good on his promise to eliminate Trump’s tax cuts, it would raise taxes on the typical family and single parent, Americans for Tax Reform reports: