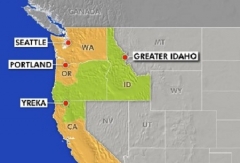 Distressed by the civil unrest in Portland and other urban cities in recent months, a coalition of Oregon citizens in rural counties have launched “Greater Idaho,” a movement to “Move Oregon’s Borders” and make themselves part of Idaho.

On July 18, the group reached one of their first goals: to put their initiative on the Wallowa County ballot in November 2020 elections.

Mike McCarter, President and Chief Petitioner of Move Oregon’s Borders for a Greater Idaho, appeared on Fox & Friends First on July 21 to discuss his plan. McCarter said the group is asking Oregon’s leaders to honor the will of the people:

“I guess if we want to boil it down to the bottom line: let us go. If that's the vote of the people, that they have lost faith in Oregon’s leadership, then let us move to Idaho. Or let Idaho move to us.”

McCarter says the values and concerns of the rural counties make better suited to be part of Idaho, and not of urban-controlled Oregon. In particular, recent months of civil unrest and protests in Portland, as well as Oregon’s COVID-19 restrictions, have spurred the group’s push to leave the state.

Greater Idaho is seeking an injunction from District Judge Michael J. McShane, which would reduce the number of signatures required and extend the deadline for the petition due to the COVID-19 restrictions. This would enable Greater Idaho to get its petition on the ballot in additional rural counties, Big Country News reports.

Over the weekend, a protest turned into a riot when police precincts were attacked and a fire was ignited inside a Police Association building late Saturday night. Reacting to the ongoing violence, McCarter told “The Washington Times” that, “We want to move the border because the political atmosphere in Oregon is getting too intense.”

“We’ve seen political violence in Portland and Eugene this year and it could get worse. Instead of fighting, Oregon could let citizens in each region of the state choose which state’s governance is more suitable to them,” McCarter said.

“Rural counties have become increasingly outraged by laws coming out of the Oregon Legislature that threaten our livelihoods, our industries, our wallet, our gun rights, and our values,” McCarter said in a press release.

“We tried voting those legislators out but rural Oregon is outnumbered and our voices are now ignored. This is our last resort,” McCarter said.