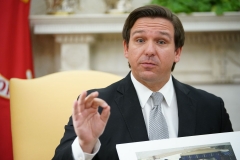 (CNS News) – After CBS’s 60 Minutes ran a segment on Sunday that edited the answer given by Florida Gov. Ron DeSantis (R) about COVID vaccine distribution in the state,  Palm Beach County Mayor Dave Kerner, a Democrat, released a statement describing the 60 Minutes report as “intentionally false.”

“I watched the 60 Minutes segment on Palm Beach County last night and feel compelled to issue this statement,” said Kerner on Apr. 5. “The reporting was not just based on bad information -- it was intentionally false. I know this because I offered to provide my insight into Palm Beach County's vaccination efforts and 60 Minutes declined.”

“We also discussed our own local plans to expand mass vaccination centers throughout the county, which the Governor has been incredibly supportive of,” said the mayor.

“We asked and he delivered,” said Kerner. “They had that information, and they left it out because it kneecaps their narrative.”

60 Minutes aired a story on Sunday revolving around Florida’s vaccine rollout that highlighted a $100,000 donation that Publix made to DeSantis’ re-election. In answering a question about the rollout and the decision to use Publix stores, 60 minutes did not air the full clip, but instead only aired a portion of the video.

The CBS report strongly suggested that the donation to Publix, and the fact that Publix was one of the main vaccine distribution locations, was a result of a “serious issue of foul play, if true.”

However, there was no evidence to support CBS's insinuation.

On Monday evening, Gov. DeSantis (R-FL) told Fox’s Tucker Carlson, “We vaccinated now 3.5 million senior citizens. We were the first state to say we are doing seniors first. We are not going to follow the CDC recommendation and what we have done has worked.

“They didn’t want to discuss that,” he said, “and obviously edited the background and they tried to act like there was a conspiracy with Publix, ignoring the fact that other pharmacies were involved before Publix.”

“Ninety-percent of the seniors live within a mile-and-a-half of a Publix,” he added. “So when we put it in there, their numbers started going through the roof -- so it succeeded there.”

The Florida mayor further defended DeSantis saying in the statement, “We have confronted this pandemic for over a year. Our residents, like all Americans, are tired. And the media is making it worse. They are Hell-bent on dividing us for cheap views and clicks. 60 Minutes should be ashamed.”

“I thank the Governor for supporting the residents of Palm Beach County. Because of his efforts, working in coordination with Palm Beach County officials, over 275,000 seniors in our county-which is over 75% of the total senior population -- have been vaccinated. I am proud of how our county and state leadership have executed on this important mission, and the results speak for themselves,” Kerner concluded.