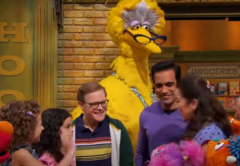 This episode of the iconic children’s television program shows relatives gathering together, and Big Bird’s “Granny Bird” surprises him with a visit.

Nina, played by Suki Lopez, invites her family to the gathering and introduces her brother, his husband and their daughter.

“Okay, everybody, everybody, I want you to meet my brother Dave, his husband Frank, and my sobrina [niece], Mia.”

Mia, played by Olivia Perez, says to her dads, “Papi, Daddy, Sesame Street is even more amazing than you said.”

“Elmo so happy that you’re all here,” says the red puppet.

“Are you kidding? We wouldn’t have missed family day for anything,” one of the dads, Frank, played by Alex Weisman, says.

Toward the end of the episode, all the various characters introduce their families, and Frank says, “There’s all kinds of different families, but what makes us a family is that we love each other.”

This is not the first time the creators of “Sesame Street” have presented homosexuality in their show.

In 2018, a rumor circulated that puppets Bert and Ernie were a gay couple. Former Sesame Street writer Mark Saltzman, who is homosexual himself, told Queerty, “I always felt that without a huge agenda, when I was writing Bert & Ernie, they were.”

Now, however, Sesame Street has formally introduced a human gay couple on their children’s show.

“Sesame Street has always been a welcoming place of diversity and inclusion,” Alan Muraoka, who plays Alan on the show, posted on Facebook.

“I am so honored and humbled to have co-directed this important and milestone episode,” he added. “Love is love, and we are so happy to add this special family to our Sesame family. Happy Pride to all!!!!”